Arepa is a type of food made of ground maize dough, originating from the northern region of South America in pre-Columbian times, and is notable primarily in the cuisines of Colombia and Venezuela, but also present in the cuisines of Bolivia and other countries.

It is eaten daily in those countries and can be served with accompaniments such as cheese, cuajada (fresh cheese), various meats, chicken, avocado, or diablito (deviled ham spread). It can also be split to make sandwiches. Sizes, maize types, and added ingredients vary its preparation. It is similar to the Mexican gordita, the Salvadoran pupusa, the Ecuadorian tortilla de maíz and the Panamanian tortilla or changa.

The arepa is a pre-Columbian dish from the area that is now Colombia and Venezuela. Instruments used to make flour for the arepas, and the clay slabs on which they were cooked, were often found at archaeological sites in the area. Although it has not been specified in which country an arepa was cooked for the first time, it has been possible to define the oldest dates of the presence of maize in Colombia and in Venezuela. For example, In Colombia, the first record of the existence of corn dates from about 3,000 years ago, while in Venezuela the estimate is about 2,800 years ago.

Throughout its history, the arepa has stayed mainly unchanged from the arepas that pre-Columbian native peoples would have consumed, making the arepa one of the few pre-contact traditions that have remained popular in the years since colonization. 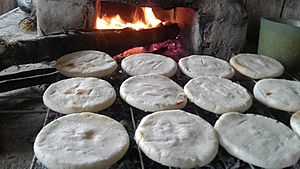 The arepa is a flat, round, unleavened patty of soaked, ground kernels of maize, or—more frequently nowadays—maize meal or maize flour that can be grilled, baked, fried, boiled or steamed. The characteristics vary by color, flavor, size, and the food with which it may be stuffed, depending on the region. Simple arepas are filled with butter or cheese and baked. More filling varieties can be topped or filled with combinations of ingredients like beans, meat, avocados, eggs, tomatoes, salad, shrimp, or fish depending on the meal.

The flour is mixed with water and salt, and occasionally oil, butter, eggs, and/or milk. Because the flour is already cooked, the blend forms into patties easily. After being kneaded and formed, the patties are fried, grilled, or baked. Some varieties of arepas are made with "peeled" corn using the nixtamalization process; they are known as arepa pelada.

Arepa flour is specially prepared (cooked in water, then dried) for making arepas and other maize dough-based dishes, such as hallacas, bollos, tamales, empanadas, atole and chicha. The flour may be called masarepa, masa de arepa, masa al instante, or harina precocida. The most popular brand names of maize flour are Harina PAN, Harina Juana in Venezuela, Areparina in Colombia, and Goya, elsewhere. 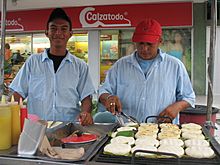 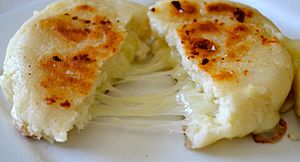 The arepa is an iconic food in Colombia, with some 75 distinct forms of preparation. According to a study conducted by the Colombian Academy of Gastronomy, the arepa is part of the Colombian cultural heritage and can be considered a symbol of national gastronomic unity."

In 2006, the arepa was named the cultural symbol of Colombia in a competition organized by Semana magazine with support from Caracol TV, the Minister of Culture and 'Colombia is Passion'.

In the Paisa region, the arepa is especially important to the local people and sometimes accompanies all meals of the day. In addition, arepas are strung into necklaces and placed around the necks of honored dignitaries as a sign of praise.

In Colombia, the arepa is sold on a commercial level in neighborhood stores, chain supermarkets and market plazas and packaged with preservatives as a pre-molded white or yellow corn dough that is ready to grill or fry at home. It is also sold in the form of industrialized corn flour that requires hydration before preparation. In addition, arepas are sold by street vendors, in cafeterias, and in neighborhood stores. Restaurants of the Paisa Region offer a wide variety of arepas, including a unique style of stuffed arepa that can be filled with eggs, meat, or cheese.

The Colombian Arepa Festival is celebrated in the following five major cities: Bogotá, Medellín, Cali, Barranquilla, and Bucaramanga. According to the program calendar, each city takes turns organizing the festival between the months of August and December.

The arepa is a symbol of Venezuelan gastronomy and one of the most common pre-Hispanic foods still popular in Venezuela.

According to a 2015 survey of the Venezuelan people, nearly 70 percent of the nation ate arepas on a regular basis. It is common for Venezuelans to eat arepas throughout the day, both as snacks and as sides to meals, creating a culture where these corn products can be found almost everywhere. The arepa is seen as a cornerstone of a Venezuelan diet; previous to the 2015 food shortages, it was estimated that each year the average Venezuelan consumed about 30 kilos of the corn flour used to make arepas. Venezuelan arepas are commonly filled with a great variety of different fillings, from beef and avocado to cheese, varying widely by the location of where they are sold and the ingredients that can be obtained.

In the Andes region of Venezuela, arepas de trigo are made with wheatflour rather than cornmeal. These lighter arepas are generally eaten as a snack or an accompaniment to heavier meals.

Bolivian arepas are made from corn. There are different ways to prepare arepas, but one of the most traditional is the Cotoca recipe. Several varieties of arepa can be found in the country, such as the Cruceña and Andina ones.

All content from Kiddle encyclopedia articles (including the article images and facts) can be freely used under Attribution-ShareAlike license, unless stated otherwise. Cite this article:
Arepa Facts for Kids. Kiddle Encyclopedia.