An empanada is a type of baked or fried turnover consisting of pastry and filling, common in Southern European, Latin American, and the Philippines cultures. The name comes from the Galician verb empanar, and translates as "enbreaded", that is, wrapped or coated in bread. They are made by folding dough over a filling, which may consist of meat, cheese, tomato, corn, or other ingredients, and then cooking the resulting turnover, either by baking or frying.

The origin of empanadas is unknown but they are thought to have originated in Galicia, a region in northwest Spain. A cookbook published in Catalan in 1520, Llibre del Coch by Robert de Nola, mentions empanadas filled with seafood in the recipes for Catalan, Italian, French, and Arabian food.

By country and region 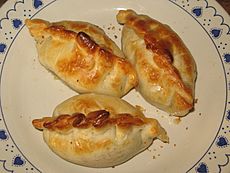 Home made empanadas from Córdoba, Argentina

Argentine empanadas are often served during parties and festivals as a starter or main course. Shops specialize in freshly made empanadas, with many flavors and fillings.

Every region of Argentina has its own characteristic variant.

Those of Salta are small, juicy and spicy, and contain potatoes, peppers and ground chili. The Jujuy variant adds peas and garlic. Its filling is called "recado" and the repulgue (the way of closing the empanada) "simbado". The La Rioja variant includes hard-boiled egg, red bell pepper, olives, and raisins. In Jujuy, there are two variants: "creoles" and "arabs". Those of Santiago are considered especially juicy. Those of Catamarca are similar but smaller. Tucumán is known for the empanada Creole; an annual "National Empanada" festival is held in Famaillá. Those of Famaillá are made with matambre and fried in good fat, competing with the "entreveradas" (mixed-grated), in which the matambre is mixed with chicken breast, garlic, ground chili, hard-boiled egg and cumin. Those of Mendoza are large and include olives and garlic. Those of San Juan have a higher proportion of onion, which made them juicier and slightly sweet, olives are also common and sometimes fat is also added to the "recado" or the dough. In San Luis they are big, seasoned with oregano and hot pepper, and kneaded with pork fat. In Córdoba, they were called "federal cake" or "empanadas de Misia Manuelita", famous because pears boiled in wine with cloves were added to their filling. Today they are not so sweet but it is tradition to sprinkle them with sugar. In Traslasierra they add carrots and potatoes. In the Litoral, where immigrants from various parts of the world predominated, Santa Fe, Entre Ríos and Corrientes fill them with river fish, being delicious the surubí, dorado or with white sauce and Goya cheese. In the Cordillera of Patagonia, they are made with lamb and on the coast with seafood. In Buenos Aires, the Creole empanada is so important that it has been declared a Cultural Heritage of Food and Gastronomy by the Argentine Ministry of Culture. 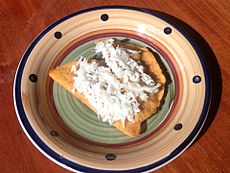 In Belize, empanadas are known as panades. They are made with masa (corn dough) and typically stuffed with fish, chicken, or beans. They are usually deep fried and served with a cabbage or salsa topping. Panades are frequently sold as street food. 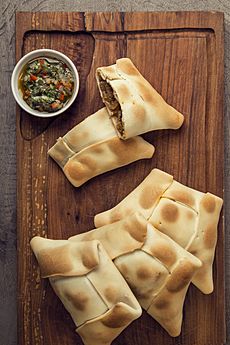 In Chile, empanadas are a staple part of the national cuisine. Commonly consumed in large quantities during the country's national day celebrations, many Chileans consider this to be their most representative dish. 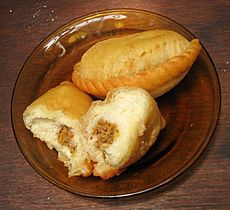 In Indonesia, empanadas are known as panada. It is especially popular within Manado cuisine of North Sulawesi where their panada has thick crust made from fried bread, filled with spicy cakalang fish (skipjack tuna) and chili, curry, potatoes or quail eggs. The panada in North Sulawesi was derived from Portuguese influence in the region. This dish almost similar to karipap and pastel, although those snacks have thinner crust compared to panada. 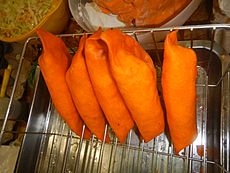 Filipino empanadas usually contain ground beef, pork or chicken, potatoes, chopped onions, and raisins (somewhat similar to the Cuban picadillo), though in a somewhat sweet, wheat flour bread. There are two kinds available: the baked sort and the flaky fried type. To lower costs, potatoes are often added as an extender, while another filling is kutsay (garlic chives).

Empanadas in the northern part of the Ilocos usually have savoury fillings of green papaya, mung beans, and sometimes chopped Ilocano sausage (chorizo) or longaniza and egg yolk. This particular variant is fried and uses rice flour for a crunchier shell. There have also been people who make empanada filled with mashed eggplant, scrambled eggs, and cabbage, which they call poqui poqui. 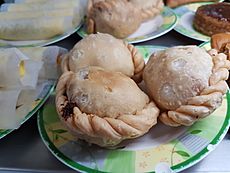 In Bulacan, empanada de kaliskis (lit. "scale empanada"), uniquely has a flaky multilayered crust resembling scales, hence the name. In Cebu, empanada Danao is a characteristically sweet-savory variant. It is filled with chopped chorizo and chayote, deep-fried, and dusted in white sugar before serving. In Zamboanga, empanada Zamboangueño is filled with chopped sweet potato, garbanzo beans, and served with a sweet vinegar dipping sauce.

Dessert versions of empanada also exist. Notable ones include empanaditas, which commonly has a filling of latik (coconut caramel), honey and nuts, or peanut butter. Kapampangan versions of empanaditas have a yema (custard) and cashew nut filling. In Cebu, sinudlan empanada is a small deep-fried empanada with bukayo (sweetened coconut meat) filling. 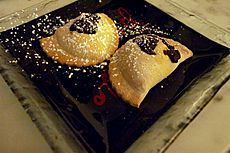 The 'Mpanatigghi are stuffed, consisting of halfmoon-shaped panzarotti filled with a mixture of almonds, walnuts, chocolate, sugar, cinnamon, cloves and minced beef. These are typical of Modica, in the province of Ragusa, Sicily. They are also known as impanatiglie or dolce di carne (pasty of meat).

They were probably introduced by the Spaniards during their rule in Sicily which took place in the sixteenth century; this is suggested from the etymology of the name which comes from the Spanish "empanadas or empanadillas" (empanada), as well as from the somewhat unusual combination of meat and chocolate, which occurs several times in the Spanish cuisine. In past centuries for the preparation of 'mpanatigghi game meat was used but today beef is used.

Empanadas, mainly based on South American recipes, are widely available in New York City, New Jersey, and Miami from food carts, food trucks, and restaurants. Empanadas are usually found in U.S. areas with a large Hispanic population, such as San Antonio and Los Angeles. 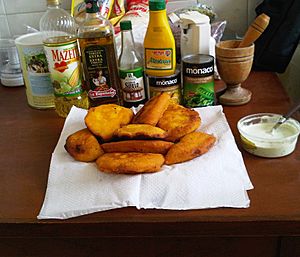 Traditional Venezuelan empanadas are made with ground corn dough, though the modern versions are made with precooked corn. The dough may have a yellow color when toasted due to the addition of annatto. The fillings are very diverse, with the most conventional being cheese, shredded beef, chicken, cazón (school shark) in the Margaritan Island region especially, ham, black beans and cheese (commonly called "dominó") and even combinations of mollusks. The Empanadas have a half moon shape and are fried in oil. Sometimes, they may have more than one filling as in the case of Empanadas de pabellón which are made with the filling of shredded beef (or cazón in the Margarita Island region), black beans, slices of fried plantain, and shredded white cheese.

The empanada resembles savory pastries found in many other cultures, such as the pirozhki, calzone, samosa, knish, kreatopitakia, Khuushuur, and pasty.

In most Malay-speaking countries in Southeast Asia, the pastry is commonly called karipap (English: curry puff).

All content from Kiddle encyclopedia articles (including the article images and facts) can be freely used under Attribution-ShareAlike license, unless stated otherwise. Cite this article:
Empanada Facts for Kids. Kiddle Encyclopedia.