Kids Encyclopedia Facts
Not to be confused with red mung bean and mungo bean. 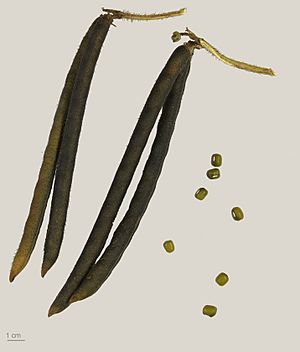 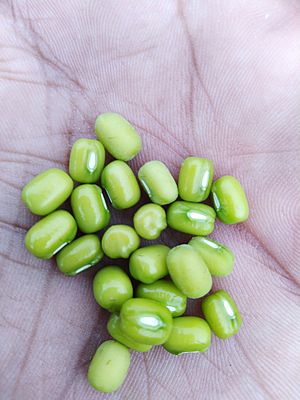 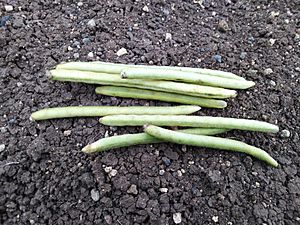 The mung bean (Vigna radiata), alternatively known as the green gram, maash (Persian: ماش), moong (from Sanskrit: मुद्ग), monggo, or munggo (Philippines), is a plant species in the legume family. The mung bean is mainly cultivated in East Asia, Southeast Asia and the Indian subcontinent. It is used as an ingredient in both savoury and sweet dishes.

The green gram is an annual vine with yellow flowers and fuzzy brown pods.

The English word mung originated (and used as is) from the Hindi word मूंग ("moong"), which is derived from the Sanskrit word मुद्ग ("mudga").

Mung beans are one of many species moved from the genus Phaseolus to Vigna in the 1970s. The previous names were Phaseolus aureus or P. radiatus. 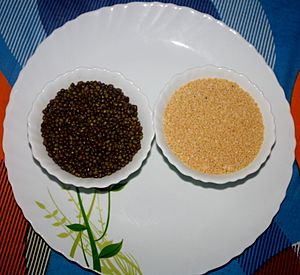 Mung beans are commonly used in cuisines across Asia.

Whole cooked mung beans are generally prepared from dried beans by boiling until they are soft. Mung beans are light yellow in colour when their skins are removed. Mung bean paste can be made by hulling, cooking, and pulverizing the beans to a dry paste.

Summer Moong is a short duration mung bean pulse crop grown in northern India. Due to its short duration, it can fit well inbetween of many cropping systems. It is mainly cultivated in East and Southeast Asia and the Indian subcontinent. It is considered to be the hardiest of all pulse crops and requires a hot climate for germination and growth.

Mung beans in some regional cuisines of India are stripped of their outer coats to make mung dal. In Bangladesh and West Bengal the stripped and split bean is used to make a soup-like dal known as moog dal (মুগ ডাল).

In the South Indian states of Karnataka, Tamil Nadu, Telangana and Andhra Pradesh, and also in Maharashtra, steamed whole beans are seasoned with spices and fresh grated coconut in a preparation called "pesalu" పెసలు in Telugu or usuli or guggari in Kannada or sundal சுண்டல் in Tamil or "usal" उसळ in Marathi. In South India, especially Andhra Pradesh, batter made from ground whole moong beans (including skin) is used to make a variety of dosa called pesarattu or pesara dosa. The same is called Adai Dosai in Tamil Nadu and ade dose in Karnataka.

In Chinese cuisine, whole mung beans are used to make a tángshuǐ, or dessert, otherwise literally translated ‘sugar water’, called lǜdòu tángshuǐ, which is served either warm or chilled. They are also often cooked with rice to make congee. Unlike in South Asia, whole mung beans seldom appear in savory dishes.

In Hong Kong, hulled mung beans and mung bean paste are made into ice cream or frozen ice pops. Mung bean paste is used as a common filling for Chinese mooncakes in East China and Taiwan. During the Dragon Boat Festival, the boiled and shelled beans are used as filling in zongzi 粽子 glutinous rice dumplings prepared for consumption. The beans may also be cooked until soft, blended into a liquid, sweetened, and served as a beverage, popular in many parts of China. In south China and Vietnam, mung bean paste may be mixed with sugar, fat, and fruits or spices to make pastries, such as Bánh đậu xanh.

In Korea, skinned mung beans are soaked and ground with some water to make a thick batter. This is used as a basis for the Korean pancakes called bindae-tteok (Hangul: {녹두}빈대떡).

In the Philippines, ginisáng monggó (sautéed mung bean stew), also known as monggó guisado or balatong, is a savoury stew of whole mung beans with prawns or fish. It is traditionally served on Fridays of Lent, when the majority Catholic Filipinos traditionally abstain from meat. Variants of ginisáng monggó may also be made with chicken or pork.

Mung bean paste is also a common filling of pastries known as hopia (or bakpia) popular in Indonesia, the Philippines and further afield in Guyana (where it is known as ”black eye cake”). In Indonesia, mung beans are also made into a popular dessert snack called es kacang hijau, which has the consistency of a porridge. The beans are cooked with sugar, coconut milk, and a little ginger. 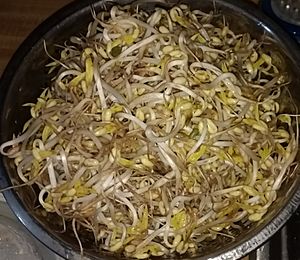 These sprouts have been transferred from a similarly-shaped colander in which they had been grown with moisture. They are ready to be cooked. 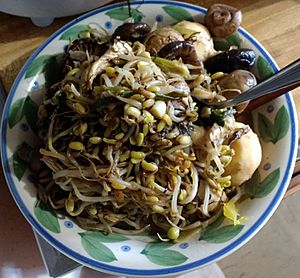 Mung beans are germinated by leaving them in water for four hours of daytime light and spending the rest of the day in the dark. Mung bean sprouts can be grown under artificial light for four hours over the period of a week. They are usually simply called "bean sprouts". However, when bean sprouts are called for in recipes, it generally refers to mung bean or soybean sprouts.

Mung bean sprouts are stir-fried as a Chinese vegetable accompaniment to a meal, usually with garlic, ginger, spring onions, or pieces of salted dried fish to add flavour. Uncooked bean sprouts are used in filling for Vietnamese spring rolls, as well as a garnish for phở. They are a major ingredient in a variety of Malaysian and Peranakan cuisine, including char kway teow, hokkien mee, mee rebus, and pasembor.

In Korea, slightly cooked mung bean sprouts, called sukjunamul (Hangul: 숙주나물), are often served as a side dish. They are blanched (placed into boiling water for less than a minute), immediately cooled in cold water, and mixed with sesame oil, garlic, salt, and often other ingredients. In the Philippines, mung bean sprouts are made into lumpia rolls called lumpiang togue.

In India, mung bean sprouts are cooked with green chili, garlic, and other spices.

In Indonesia the food are often used as fillings like tahu isi (stuffed tofu) and complementary ingredient in many dishes such as rawon and soto.

In Japan (and Brazil), the sprouts are called moyashi.

Mung batter is used to make crepes named pesarattu in Andhra Pradesh, India and pancakes named bindaetteok in Korea. (The starch content is around 56.82%.)

Mung beans are increasingly used in plant-based meat and egg alternatives such as Beyond Meat and Just Egg.

History of domestication and cultivation

The mung bean was domesticated in India, where its progenitor (Vigna radiata subspecies sublobata) occurs wild.

Carbonized mung beans have been discovered in many archeological sites in India. Areas with early finds include the eastern zone of the Harappan Civilisation in modern-day Pakistan and western- and northwestern India, where finds date back about 4,500 years, and South India in the modern state of Karnataka where finds date back more than 4,000 years. Some scholars, therefore, infer two separate domestications in the northwest and south of India. In South India, there is evidence for the evolution of larger-seeded mung beans 3,500 to 3,000 years ago. By about 3500 years ago mung beans were widely cultivated throughout India.

Cultivated mung beans later spread from India to China and Southeast Asia. Archaeobotanical research at the site of Khao Sam Kaeo in southern Thailand indicates that mung beans had arrived in Thailand by at least 2,200 years ago.

All content from Kiddle encyclopedia articles (including the article images and facts) can be freely used under Attribution-ShareAlike license, unless stated otherwise. Cite this article:
Mung bean Facts for Kids. Kiddle Encyclopedia.