Kids Encyclopedia Facts
This page is about the Chinese dish. For the similar Chinese-American dish, see Egg roll.

Spring rolls are a large variety of filled, rolled appetizers or dim sum found in East Asian, South Asian, Southeast Asian and Latin American cuisine. The name is a literal translation of the Chinese chūn juǎn (春卷 'spring roll'). The kind of wrapper, fillings, and cooking technique used, as well as the name, vary considerably within this large area, depending on the region's culture.

Spring rolls were a seasonal food consumed during the spring, and started as a pancake filled with the new season's spring vegetables, a welcome change from the preserved foods of the long winter months. In Chinese cuisine, spring rolls are savory rolls with cabbage and other vegetable fillings inside a thinly wrapped cylindrical pastry. They are usually eaten during the Spring Festival in mainland China, hence the name. Meat varieties, particularly pork, are also popular. Fried spring rolls are generally small and crisp. They can be sweet or savory; the former often with red bean paste filling, and the latter are typically prepared with vegetables. They are fully wrapped before being pan-fried or deep-fried. 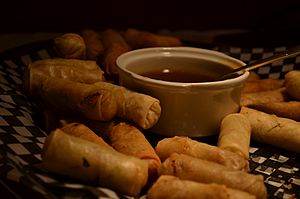 Spring rolls are often eaten as snacks in the Indian sub-continent and are especially eaten during holidays such as Ramadan. In Pakistan, they are usually served with tea along with other assortments of snacks. 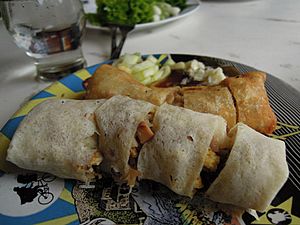 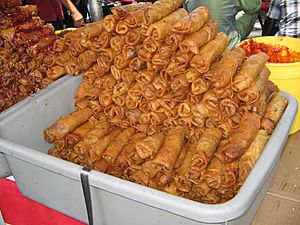 Hot and spicy popiah in Malaysia

Lumpia is the name for spring rolls in Indonesia and the Philippines, which was derived from Southern Chinese spring rolls. The name lumpia derives from Hokkien lunpia (Chinese: 潤餅; pinyin: rùnbǐng; Pe̍h-ōe-jī: jūn-piáⁿ, lūn-piáⁿ) and was introduced in the Philippine islands during the 17th century. It is a savoury snack made of thin crepe pastry skin enveloping a mixture of savoury fillings, consists of chopped vegetables; carrots, cabbages, green beans, bamboo shoots, banana heart and leeks, or sometimes also minced meat; chicken, shrimp, pork or beef. It is often served as an appetizer or snack, and might be served deep fried or fresh (unfried). In both Malaysia, Singapore and Thailand, it is called popiah similar as in Taiwan while in Myanmar, it is referred as kawpyan (ကော်ပြန့်).

The fried version with minced pork is called imperial rolls or spring rolls chả giò (southern Vietnam), nem cuốn, chả cuốn or Nem rán (northern Vietnam). They are often called "egg rolls" in Western countries, which is a misnomer. Central Vietnam has its own version of a fried roll called “ram”. Ram is always made from whole shell-on shrimp or chopped de-shelled shrimp and some green onions, wrapped in rice paper and deep fried. Ram, like most specialty food items from central Vietnam, are not widely available in Vietnamese restaurants overseas.

A Vietnamese imperial roll is different from a Chinese spring roll in that it is typically smaller and contains ground or chopped meats/seafood such as pork, crab, shrimp, chicken, taro or cassava, glass noodles, wood-ear fungi or oyster mushrooms, and shredded carrots. Rice paper is traditionally used as the wrappers. However, there are several Vietnamese restaurants in Western countries that may use Chinese spring roll wrappers due to the unavailability of rice paper or ease of use. 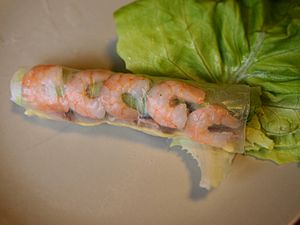 In Australia, a diverse range of authentic Asian cuisine is available due to immigration, multiculturalism, and the abundant fresh local produce. Both dim sims and Chiko Rolls were inspired by Chinese spring rolls.

Australians also have their own version of a spring roll that can be found in many fish and chip shops in Australia and also bought from a supermarket (Chiko Roll). Rather than using pastry with a rolling technique they have a more doughy texture.

In Austria and Germany, deep-fried spring rolls are called Frühlingsrolle, while the Vietnamese salad rolls are called Sommerrolle ("summer roll"). The French call them nem for the fried ones, and rouleaux de printemps for the others, whereas in Poland they are known as sajgonki, named after Saigon, the city from which many of the Vietnamese immigrants in Poland originated.

In the Netherlands and Belgium, spring rolls are known as loempia and are deep-fried or sometimes baked. They are thought to have been introduced by immigrants (including Chinese) from Indonesia, a former colony of the Netherlands. Loempias are filled with bean sprouts, chopped omelette, and sliced chicken or crab. It's also getting more common for loempias to appear with sweet and spicy sauce.

In the Nordic countries, they are known as vårrullar/er (Norwegian/Swedish), forårsruller (Danish), or kevätkääryle (Finnish).

In Argentina, spring rolls are called arrolladitos primavera, and are sold both in supermarkets and Chinese restaurants.

In Brazil, spring rolls are called either rolinhos-primavera, which is an approximate free translation from English, or as it is called in Japanese restaurants and among people which are used to the plate by the way it came to Brazil from Japanese immigrants, "spring roll" (春巻きcode: ja is deprecated , harumaki). They can be found mostly in Chinese restaurants, usually served with a molho agridoce (sweet and sour sauce) to dip, usually bright red and hot, made with ketchup, vinegar, sugar and sometimes spices such as star anise, which accompanies some other kinds of dishes, and can include onion and sweet pepper. Some Japanese restaurants also serve spring rolls in Brazil, but generally plain or with soy sauce to dip (molho agridoce is also available in some). They are also found in buffet-like fast food restaurants, and can be called either by the Japanese or Brazilian Portuguese name, but most often the latter.

In Chile, spring rolls are called arrollado primavera, and supermarkets, street vendors and Chinese restaurants sell them. (However, in other countries, "arrollado primavera" refers to a savory pinwheel-type roll made with thin sponge cake and should not be confused with the Chilean version.)

In Costa Rica, spring rolls are called in Spanish rollito de primavera ("little spring roll"), but is popular known as "Taco Chino" and is offered in almost all the Chinese restaurants as an entree or appetizer.

In Mexico, spring rolls are called rollos primavera (which translates directly to "spring rolls"), and are sold in many Chinese restaurants and fast-food establishments accompanied with sweet and sour or soy sauces. On the northwest border with the US, specially in Mexicali, Baja California, the spring rolls are known as chunkun; this name could be related to the Korean chungwon (춘권). They are deep-fried and they are usually served with ketchup topped with a dot of hot mustard as dipping sauce.

In Uruguay and Argentina, spring rolls are called arrolladitos primavera (which translates directly to "spring rolls"), and supermarkets and Chinese restaurants sell them. They are common treat carried by catering services and usually served with a small bowl of hot soy sauce to dip them in.

In Venezuela, spring rolls are called lumpia as in the Philippines and Indonesia. Many Chinese restaurants sell them, and they are usually served with sweet and sour or soy sauce.

All content from Kiddle encyclopedia articles (including the article images and facts) can be freely used under Attribution-ShareAlike license, unless stated otherwise. Cite this article:
Spring roll Facts for Kids. Kiddle Encyclopedia.