Kids Encyclopedia Facts
This page is about the Chinese-American dish/pastry. For the similar Chinese dish, see spring roll. For the traditional Easter activity, see egg rolling. For the Japanese dish, see tamagoyaki. For the Korean dish, see gyeran-mari.

Egg rolls are a variety of deep-fried appetizers served in American Chinese restaurants. An egg roll is a cylindrical, savory roll with shredded cabbage, chopped pork, and other fillings inside a thickly-wrapped wheat flour skin, which is fried in hot oil. The dish is served warm, and is usually eaten with the fingers, dipped in duck sauce, soy sauce, plum sauce, or hot mustard, often from a cellophane packet. Egg rolls are a ubiquitous feature of American Chinese cuisine and are often served as free additions to American Chinese combination platters throughout the United States, along with fried rice and fortune cookies.

Provenance of the dish 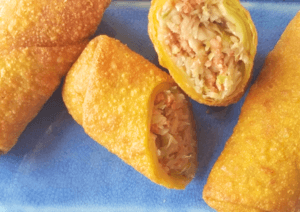 Egg roll filling is mostly shredded cabbage with a small amount of finely chopped meat and other ingredients.

The origins of the dish are unclear and remain disputed. Egg rolls are closely related to, but distinct from, the spring rolls served in mainland China, and were first seen in the early 20th century in the United States. An early reference to egg rolls appeared in a 1917 Chinese recipe pamphlet published in the United States, but the dish does not resemble the modern egg roll. The 1917 recipe described a meat and vegetable filling wrapped in an egg omelette, pan fried, and served in slices, similar to Gyeran-mari.

Andrew Coe, author of Chop Suey: A Cultural history of Chinese food in the United States, has stated that the modern American egg roll was probably invented at a Chinese restaurant in New York City in the early 1930s, by one of two chefs who both later claimed credit for the creation: Lung Fong of Lung Fong's, or Henry Low of Port Arthur. According to Coe, Low's recipe, printed in a 1938 cookbook, Cook at Home in Chinese, included "bamboo shoots, roast pork, shrimp, scallions, water chestnuts, salt, MSG, sugar, palm oil, and pepper," but notably did not include cabbage, which is the main filling ingredient in modern egg rolls.

Egg rolls do not typically contain egg in the filling, and the wheat flour wrapper may or may not contain egg. In addition to the disputed origin of the dish, it is unclear how the word "egg" appeared in the name, since the predominant flavor in American egg rolls is cabbage, not eggs. A 1979 article in The Washington Post speculated that the Chinese word for "egg" sounds very similar to the Chinese word for "spring", but this theory has not been widely adopted and is not accurate.

Confusion with other varieties of rolls

While there are many types of spring rolls native to East Asia and available in authentic Chinese, Thai, and Vietnamese restaurants in the United States, American egg rolls are distinctive. A typical "New York-style" egg roll measures approximately two inches in diameter by six inches in length, with a thick, chewy, crispy, bumpy exterior skin. Egg rolls, like other Americanized Chinese food specialties, may contain vegetable cultivars and flavor profiles that are not common in China, including broccoli.

All content from Kiddle encyclopedia articles (including the article images and facts) can be freely used under Attribution-ShareAlike license, unless stated otherwise. Cite this article:
Egg roll Facts for Kids. Kiddle Encyclopedia.