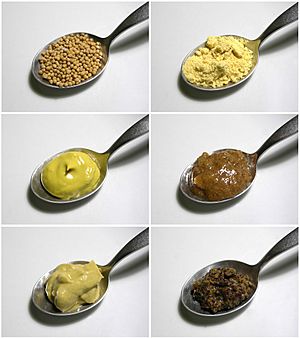 The whole, ground, cracked, or bruised mustard seeds are mixed with water, vinegar, lemon juice, wine, or other liquids, salt, and often other flavorings and spices, to create a paste or sauce ranging in color from bright yellow to dark brown. The taste of mustard ranges from sweet to spicy.

Commonly paired with meats and cheeses, mustard is added to sandwiches, hamburgers, corn dogs, and hot dogs. It is also used as an ingredient in many dressings, glazes, sauces, soups, and marinades. 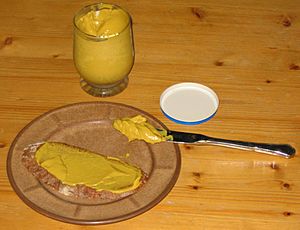 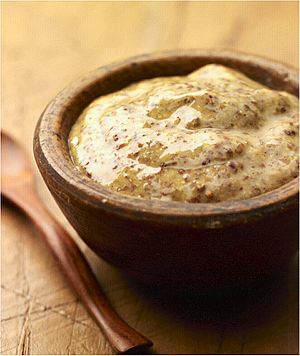 As a cream or as individual seeds, mustard is used as a condiment in the cuisine of India and Bangladesh, the Mediterranean, northern and southeastern Europe, Asia, the Americas, and Africa, making it one of the most popular and widely used spices and condiments in the world. 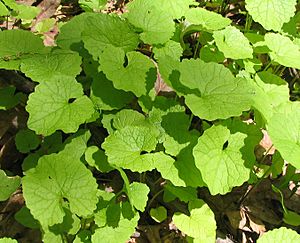 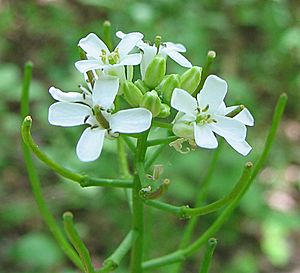 Archeological excavations in the Indus Valley (Indian Subcontinent) have revealed that mustard was cultivated there. That civilization existed until about 1800 BC.

The Romans were probably the first to experiment with the preparation of mustard as a condiment. They mixed unfermented grape juice (the must) with ground mustard seeds to make "burning must". A recipe for mustard appears in a Roman cookbook from the late 4th or early 5th century; the recipe calls for a mixture of ground mustard, pepper, caraway, lovage, grilled coriander seeds, dill, celery, thyme, oregano, onion, honey, vinegar, fish sauce, and oil, and was intended as a glaze for spit-roasted boar.

The Romans likely exported mustard seed to Gaul, and by the 10th century, monks in Paris absorbed the mustard-making knowledge of Romans and began their own production. The first appearance of mustard makers on the royal registers in Paris dates back to 1292. Dijon, France, became a recognized center for mustard making by the 13th century.

The early use of mustard as a condiment in England is attested from the year 1390. It was prepared in the form of mustard balls — coarse-ground mustard seed combined with flour and cinnamon, moistened, rolled into balls, and dried — which were easily stored and combined with vinegar or wine to make mustard paste as needed.

The use of mustard as a hot dog condiment was first said to be seen in the US at the 1904 St. Louis World's Fair, when the bright-yellow French's mustard was introduced by the R.T. French Company. 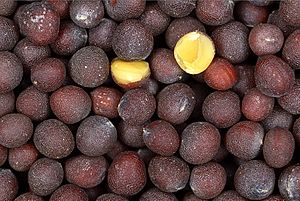 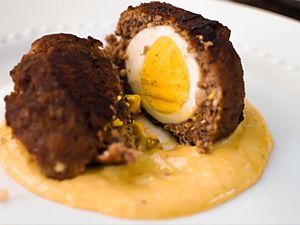 Mustard is most often used at the table as a condiment on cold meats. It is also used as an ingredient in mayonnaise, vinaigrette, marinades, and barbecue sauce. Mustard is also a popular accompaniment to hot dogs, pretzels, and bratwurst. In the Netherlands and northern Belgium it is commonly used to make mustard soup; which includes mustard, cream, parsley, garlic and pieces of salted bacon. Mustard as an emulsifier can stabilize a mixture of two or more immiscible liquids, such as oil and water. Added to Hollandaise sauce, mustard can inhibit curdling.

The amounts of various nutrients in mustard seed are to be found in the USDA National Nutrient Database. As a condiment, mustard averages approximately 5 calories per teaspoon. Some of the many vitamins and nutrients found in mustard seeds are selenium and omega 3 fatty acid.

The many varieties of prepared mustards have a wide range of strengths and flavors, depending on the variety of mustard seed and the preparation method. The basic taste and "heat" of the mustard are determined largely by seed type, preparation and ingredients. Preparations from the white mustard plant have a less pungent flavor than preparations of black mustard or brown Indian mustard.

Mustard oil can be extracted from the chaff and meal of the seed.

The mustard plant ingredient itself has a sharp, hot, pungent flavor. Mixing ground mustard seeds with water causes a chemical reaction between two compounds in the seed: which make different flavors and intensities.

Prepared mustard condiment may also have ingredients giving salty, sour (vinegar), and sweet flavors. Turmeric is often added to commercially prepared mustards, mainly to give them a yellow color. 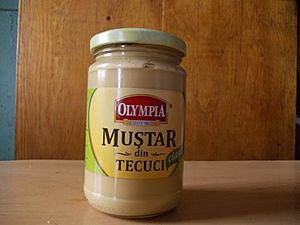 Prepared mustard is sold in glass jars, plastic bottles, or metal squeeze tubes. Because of its antibacterial properties, mustard does not require refrigeration for safety; it will not grow mold, mildew, or harmful bacteria. Mustard can last indefinitely without becoming inedible or harmful, though it may dry out, lose flavor, or brown from oxidation. Mixing in a small amount of wine or vinegar may improve dried-out mustard. Some types of prepared mustard stored for a long time may separate, which can be corrected by stirring or shaking. If stored unrefrigerated for a long time, mustard can acquire a bitter taste.

Locations renowned for their mustard include Dijon (medium-strength) and Meaux in France; Norwich (very hot) and Tewkesbury's mustard, in the United Kingdom; and Düsseldorf (hot) and Bavaria in Germany. Bavarian sweet mustard contains very little acid, substituting copious amounts of sugar for preservation. The Tecuci mustard from Romania is a sweet variety very popular in Eastern Europe and is suitable for barbecued meats. Sometimes prepared mustard is simmered to moderate its bite, and sometimes it is aged. Irish mustard is a whole-grain mustard blended with whiskey, stout, or honey.

Hot table mustard may easily be prepared by the home cook by mixing "powdered mustard" (ground mustard seed, turmeric and wheat flour) to the desired consistency with water or an acidic liquid such as wine, vinegar, or beer, and leaving to stand for ten minutes. It is usually prepared immediately before a meal; mustard prepared with water, in particular, is more pungent but deteriorates rapidly. 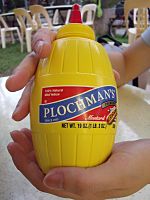 The most commonly used mustard in the United States – and tied with Dijon in Canada – is American mustard sold as "yellow mustard" (although most prepared mustards are yellow) and commonly referred to as just "mustard". A very mild prepared mustard colored bright yellow from turmeric powder, it was supposedly introduced in 1904 as "cream salad mustard".

American mustard is regularly used to top hot dogs, sandwiches, pretzels and hamburgers. It is also an ingredient of many potato salads, barbecue sauces, and salad dressings. It is commonly referred to as "hot dog", "ball park", "yellow", "sunshine" or "prepared" mustard for these applications.

Spicy brown mustard is also commonly used in the United States. The seeds are coarsely ground, giving it a speckled brownish-yellow appearance. In general, it is spicier than American mustard. Some "Deli-style" mustard incorporates horseradish which actually makes it a little spicier than spicy brown. A variety popular in Louisiana is called Creole mustard.

Beer mustard, which uses beer instead of vinegar, allegedly originated in the 20th century somewhere in the United States Midwest and has remained a popular local condiment. 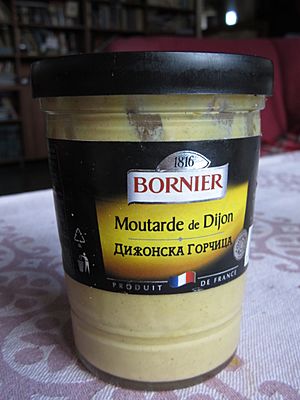 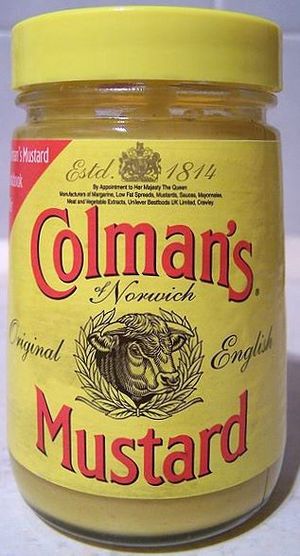 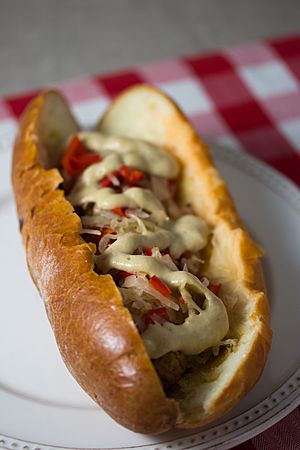 Dijon mustard originated in 1856, when Jean Naigeon of Dijon replaced the usual ingredient of vinegar with the acidic "green" juice of unripe grapes. Most mustard's from Dijon today contain white wine. "Dijon mustard" is not a protected food name. While mustard factories still operate in Dijon and adjoining towns, most mustard described as "Dijon" is manufactured elsewhere. Even that produced in France is made almost exclusively from Canadian mustard seed. 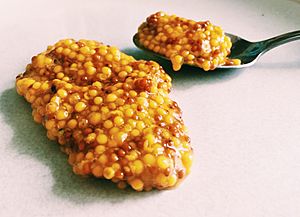 In whole-grain mustard, also known as granary mustard, the seeds are mixed whole with other ingredients. Different flavors and strengths can be achieved through different blends of mustard seed species.

English mustard is one of the hottest in the world. It is bright yellow in color with a thicker consistency than the mild American mustard. The most famous brand of English mustard is Colman's, who first produced their variety in 1814 as a powder in their yellow tin.

This dark brown, mild and tangy/sweet mustard, despite its name, is not French in origin. "French" mustard is particular to the UK and was invented by Colman's in 1936. It became a popular accompaniment to steak in particular. Colman's ceased production of French mustard in 2001. Many British supermarkets still offer their own version of French mustard.

Honey mustard, as its name suggests, is a blend of mustard and honey, typically mixed in a 1:1 ratio. It is commonly used both on sandwiches, and as a dip for finger foods such as chicken strips. It can also be combined with vinegar or olive oil to make a salad dressing.

Combinations of English mustard with honey or Demerara sugar are used in British cuisine to coat grilled lamb cutlets or pork chops.

Chili peppers of various strengths are used to make a variety of mustard's more piquant than plain mustard. Peppers or hot sauce made from peppers are added to mustard's of different base styles such as yellow mustard, brown mustard or spirited mustard's.

Fruit and mustard have been combined since the 14th century. Large chunks of fruit preserved in a sweet, hot mustard syrup were served with meat and game. Traditional variations of fruit mustard's include apple mustard, quince, mild and with a jam-like appearance) and cherry mustard.

The term hot mustard is used for mustard's prepared to bring out the natural piquancy of the mustard seeds. This is enhanced by using pungent black or brown mustard seeds rather than the white mustard seeds used to make mild mustard's.

Sweet mustard is from Bavaria, made from kibbled mustard seed and sweetened with sugar, apple sauce or honey.

Brown mustard is a spice that is one of the important spices used in the Indian subcontinent today. Kasundi is a popular Bengali spicy relish of mustard. It is used during regular meals and with a variety of fruits and street food.

A strong mustard can make the eyes water, and sting the tongue, palate, and throat. Home-made mustards may be hotter and more intensely flavored than most commercial preparations.

Any part of the mustard plant can also, rarely, cause allergic reactions in some people, including anaphylaxis. Since 2005, pre-packed food in the European Union must show on its label if it contains mustard.

All content from Kiddle encyclopedia articles (including the article images and facts) can be freely used under Attribution-ShareAlike license, unless stated otherwise. Cite this article:
Culinary mustard Facts for Kids. Kiddle Encyclopedia.