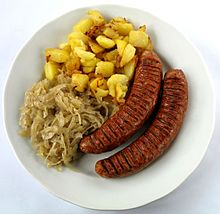 Bratwurst with cabbage and potatoes

Bratwurst is a kind of German food. It is a type of sausage. It is composed of pork or beef, and sometimes veal.

Bratwurst is German, from Old High German brätwurst, from brät which is a derivative of the Old High German word "brato". "Brato" originally meant hacked meat, intestines. The other part of the word is wurst which means sausage.

Where the sausage comes from 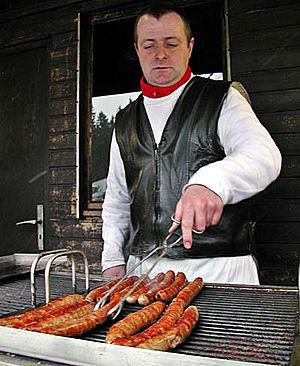 Though originally Celtic in origin, the German "Bratwurst" comes from Franconia, specifically Weißenburg-Treuchtlingen.

There are many different kinds of these sausages. All are special in their own way:

A "Bratwurst meal" often is eaten with sauerkraut, mashed potatoes and roasted onions. Sometimes, it is also served with a potato sauce, or a potato salad.

How the sausage is prepared

Today, most kinds of Bratwurst are prepared by roasting them. Depending on the kind of Bratwurst, it may have been cooked beforehand. Sausages that use raw meat, and that are not roasted or cooked before they are eaten are usually not called Bratwurst.

How people eat the sausage

The sausage is usually eaten with a hot or sweet German mustard or sliced and eaten as Currywurst. Sometimes, some hot French mustard is served as well. Bratwurst is almost always served with a hard German roll and usually accompanied by a beer. It is a popular snack in German-speaking countries, where it is sold at various fast food outlets and is often consumed while standing.

Bratwurst in the US

In the United States, bratwurst are usually eaten with bread (a hot dog bun or a hardroll, for example) and topped with mustard and/or many of the other condiments often eaten with hot dogs, including onions (grilled and/or raw), relish, sauerkraut, etc. The bratwurst is occasionally eaten with a pair of brat links nestled in a buttered hardroll with these same toppings, which is called a 'double brat'.

Within the US, bratwurst is strongly identified with Milwaukee, Wisconsin, and other areas in a band stretching from the north side of Chicago up through Minnesota and scattered pockets elsewhere in the Midwest.

They are especially popular in areas of the US where German-Americans settled in large numbers, like Sheboygan, Wisconsin, which is informally known as the Bratwurst Capital of the World because of the city and county's very strong German roots and connections to bratwurst. Johnsonville Foods, the nation's largest bratwurst maker, is based in the nearby unincorporated village of Johnsonville. The city also celebrates Sheboygan Bratwurst Days, a community festival held on the first Thursday-Saturday of August each year that celebrates the bratwurst. Other traditional Wisconsin brat manufacturers include Klement's Sausage Company and Usinger's, both of which are based in Milwaukee.

Another town with German-American roots associated with bratwurst is Bucyrus, Ohio, which is known for its unique recipe incorporating fennel. It holds a bratwurst festival annually in mid-August attracting over 100,000 visitors annually. [1]

All content from Kiddle encyclopedia articles (including the article images and facts) can be freely used under Attribution-ShareAlike license, unless stated otherwise. Cite this article:
Bratwurst Facts for Kids. Kiddle Encyclopedia.