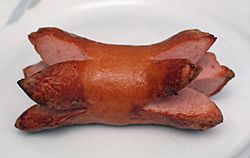 Cervelat, also cervelas, servelat or zervelat, is a sausage produced in Switzerland, France and parts of Germany. They contain a mixture of beef, bacon and pork rind. The cervelat is often referred to as the national sausage of Switzerland. Swiss cervelats are prepared and eaten cooked or raw. They are boiled, grilled or fried. They can also be served uncooked, either in a salad or with bread and mustard. The sausages are called cervelas in the French-speaking part of Switzerland, Cervelat in the German-speaking part, and servelat in the Italian-speaking part.

All content from Kiddle encyclopedia articles (including the article images and facts) can be freely used under Attribution-ShareAlike license, unless stated otherwise. Cite this article:
Cervelat Facts for Kids. Kiddle Encyclopedia.