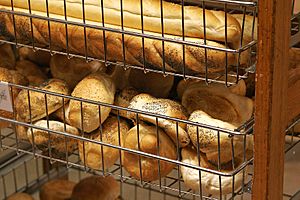 Bread Rolls at a bakery 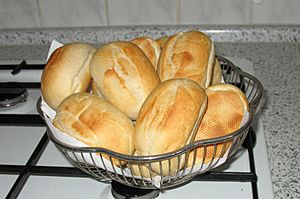 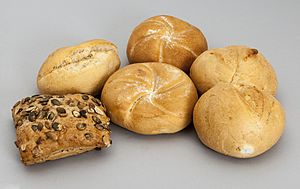 A bread roll is a piece of bread, usually small and round and is usually a side dish. Bread rolls are most times used in the same way as sandwiches are - cut in half, with items like butter placed between the two halves.

There are many names for bread rolls, especially in local versions of British English. These were named depending on how the dough was made and how the roll was cooked. Over time, most people started using one name to call all equal products regardless of whether it is right or not.

Bread rolls are common in Europe, mostly in Germany and Austria. They are also common in both Australia and New Zealand, and very common in Canada. In Germany and Austria, there is a large variety of bread rolls, ranging from white rolls made with wheat flour, to dark rolls containing mostly rye flour. Many variants include spices, such as coriander and cumin, nuts, or seeds, such as sesame seeds, poppy seed or sunflower seeds.

An Italian form of bread roll is a small loaf of ciabatta which can be used to make a panino (or panini). In Denmark and Norway, rolls are called rundstykker (literally "round pieces") and are comfort food eaten with butter for special weekend breakfasts.

All content from Kiddle encyclopedia articles (including the article images and facts) can be freely used under Attribution-ShareAlike license, unless stated otherwise. Cite this article:
Bread roll Facts for Kids. Kiddle Encyclopedia.