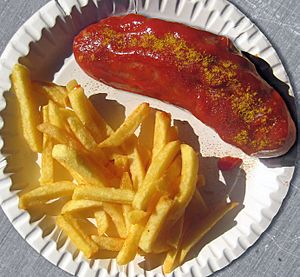 Currywurst is a German dish. It is made from a pork sausage (German: wurst), sliced and covered in a curry sauce (usually ketchup or tomato paste blended with curry) and generous amounts of curry powder.

Currywurst is often sold as a take-out/take-away food, Schnell-Imbisse, at diners or "greasy spoons," on children's menus in restaurants, or as a street food. 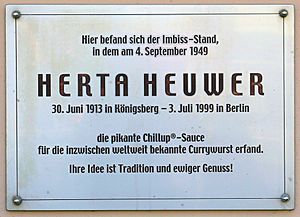 Plaque at the site of Herta Heuwer's stall

Berlin legend says that Herta Heuwer, from Königsberg, invented the currywurst sauce by experimenting at her stall in Berlin-Charlottenburg in 1949.

People from the Ruhr-area say that the sauce was accidentally invented by a sausage stall owner in Essen, who dropped a can with curry powder into some ketchup.

Early in his career German pop singer Herbert Grönemeyer, raised in Bochum, wrote a song, in the Ruhr dialect, to currywurst.

Although Berlin claims currywurst as its invention and "national dish", all over Germany, there are more than 20 different types of currywurst.

All content from Kiddle encyclopedia articles (including the article images and facts) can be freely used under Attribution-ShareAlike license, unless stated otherwise. Cite this article:
Currywurst Facts for Kids. Kiddle Encyclopedia.