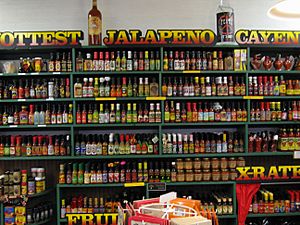 Hot sauce, chili sauce, or pepper sauce are all spicy condiments made from chili peppers. 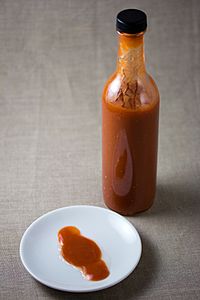 Humans have used chili peppers and other hot spices for thousands of years. Inhabitants of Mexico, Central America and South America had chili peppers more than 6,000 years ago. Within decades of contact with Spain and Portugal in the 16th century, the American plant was carried across Europe and into Africa and Asia, and altered through selective breeding. One of the first commercially available bottled hot sauces in America appeared in 1807 in Massachusetts. Few of the early brands from the 1800s survive to this day, however. Tabasco sauce is the earliest recognizable brand in the United States hot sauce industry, appearing in 1868. As of 2010, it was the number 13 best-selling seasoning in the United States preceded by Frank's RedHot Sauce in 12th place, which was the sauce first used to create buffalo wings. 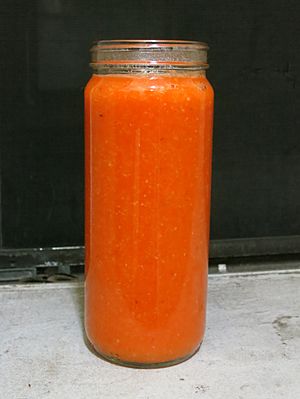 Many recipes for hot sauces exist, but the only common ingredient is some variety of chili pepper. Many hot sauces are made by using chili peppers as the base and can be as simple as adding salt and vinegar. Other sauces use some type of fruits or vegetables as the base and add the chili peppers to make them hot. Manufacturers use many different processes from aging in containers to pureeing and cooking the ingredients to achieve a desired flavor. Because of their ratings on the Scoville scale, Ghost pepper and Habanero peppers are used to make the hotter sauces but additional ingredients are used to add extra heat, such as pure capsaicin extract and mustard oil. Other common ingredients include vinegar and spices. Vinegar is used primarily as a natural preservative, but flavored vinegars can be used to alter the flavour.

All content from Kiddle encyclopedia articles (including the article images and facts) can be freely used under Attribution-ShareAlike license, unless stated otherwise. Cite this article:
Hot sauce Facts for Kids. Kiddle Encyclopedia.