The habanero chili comes from the Amazonas region. From there it was spread in Mexico. The habanero is a perennial flowering plant. With proper care and growing conditions, it can produce flowers (and thus fruit) for many years.

Origin and current use 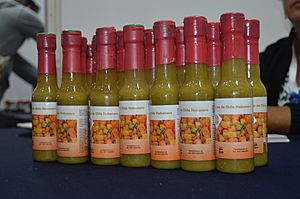 The habanero chili comes from the Amazon, from which it was spread, reaching Mexico. A specimen of a domesticated habanero plant, dated at 8,500 years old, was found at an archaeological site in Peru. An intact fruit of a small domesticated habanero, found in pre-ceramic levels in Guitarrero Cave in the Peruvian highlands, was dated to 6500 BC.

The habanero chili was disseminated by Spanish colonists to other areas of the world, to the point that 18th-century taxonomists mistook China for its place of origin and called it Capsicum chinense ("the Chinese pepper").

Today, the largest producer is the Yucatán Peninsula, in Mexico. Habaneros are an integral part of Yucatecan food, accompanying most dishes, either in natural form or purée or salsa. Other modern producers include Belize, Panama, Costa Rica, Colombia, Ecuador, and parts of the United States, including Texas, Idaho, and California.

The Scotch bonnet is often compared to the habanero, since they are two varieties of the same species, but they have different pod types. Both the Scotch bonnet and the habanero have thin, waxy flesh. They have a similar heat level and flavor. Both varieties average around the same level of pungency, but the actual degree varies greatly from one fruit to another according to genetics, growing methods, climate, and plant stress.

In 1999, the habanero was listed by Guinness World Records as the world's hottest chili, but it has since been displaced by other peppers. The Bhut jolokia (or ghost pepper) and Trinidad moruga scorpion have since been identified as native Capsicum chinense subspecies even hotter than the habanero. Breeders constantly crossbreed subspecies to attempt to create cultivars that will break the record on the Scoville scale. One example is the Carolina Reaper, a cross between a Bhut jolokia pepper with a particularly pungent red habanero.

Habaneros thrive in hot weather. Like all peppers, the habanero does well in an area with good morning sun and in soil with a pH level around 5 to 6 (slightly acidic). Habaneros which are watered daily produce more vegetative growth but the same number of fruit, with lower concentrations of capsaicin, as compared to plants which are watered only when dry (every seven days). Overly moist soil and roots will produce bitter-tasting peppers. Daily watering during flowering and early setting of fruit helps prevent flower and immature fruit from dropping, but flower dropping rates are reported to often reach 90% even in ideal conditions.

The habanero is a perennial flowering plant, meaning that with proper care and growing conditions, it can produce flowers (and thus fruit) for many years. Habanero bushes are good candidates for a container garden. In temperate climates, though, it is treated as an annual, dying each winter and being replaced the next spring. In tropical and subtropical regions, the habanero, like other chiles, will produce year round. As long as conditions are favorable, the plant will set fruit continuously.

All content from Kiddle encyclopedia articles (including the article images and facts) can be freely used under Attribution-ShareAlike license, unless stated otherwise. Cite this article:
Habanero chili Facts for Kids. Kiddle Encyclopedia.