The Carolina Reaper is a cultivar of the Capsicum chinense plant. Developed by South Carolina breeder Ed Currie, the pepper is red and gnarled, with a bumpy texture and small pointed tail. In 2017, Guinness World Records declared it the hottest chili pepper in the world, surpassing the previous record holder, the Trinidad Scorpion "Butch T". 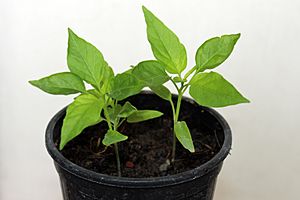 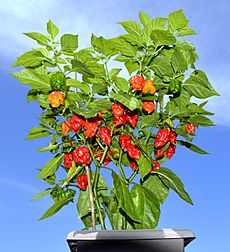 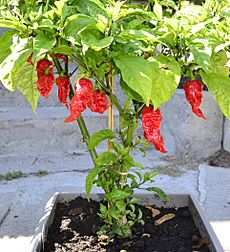 The sensory heat or pungency detected when eating a Carolina Reaper derives from the density of capsaicinoids, particularly capsaicin, which relates directly to the intensity of chili pepper heat and Scoville scale. Bred in a Rock Hill, South Carolina, greenhouse by "Smokin" Ed Currie, proprietor of the PuckerButt Pepper Company in Fort Mill, the Carolina Reaper was certified as the world's hottest chili pepper by Guinness World Records on August 11, 2017. The official Guinness World Record heat level was 1,641,183 Scoville Heat Units (SHU) in 2017, according to tests conducted by Winthrop University in South Carolina. The figure is an average for the tested batch; the hottest individual pepper was measured at 2.2 million SHU.

The crossbreed is between a "really nastily hot" La Soufriere pepper from the Caribbean island of St. Vincent and a Naga Viper pepper from Pakistan and is named 'Reaper' due to the shape of its tail. It has been described as having a fruity taste, with the initial bite being sweet and then immediately turning to "molten lava".

In May 2017, Mike Smith of St Asaph, Wales, working with Nottingham Trent University, claimed to have surpassed the Carolina Reaper with his Dragon's Breath pepper, reported to be 2.4 million SHUs, and applied to Guinness World Records for confirmation. However, In September 2017, Ed Currie claimed to have bred a stronger pepper known as Pepper X having 3.18 million SHUs.

In April 2018, a case report of "thunderclap headaches" in a 34-year-old man – who was hospitalized a few days after consuming one Carolina Reaper pepper of unspecified size in a contest – included a presumptive diagnosis of reversible cerebral vasoconstriction syndrome (RCVS). With no reason to believe pepper compounds had a role in the mechanism of RCVS, other clinical interpretations, such as a stress response from eating such a hot pepper, may explain the headaches.

For growing, the pepper has been described as "a good all-rounder to try at home" by UK ethnobotanist James Wong, who said that they require temperatures of at least 18–20 °C (64–68 °F) and suggested growing in 30–40 cm (12–16 in) pots to restrict growth and produce fruit sooner. When fully ripe, two peppers occupy the palm of the hand.

All content from Kiddle encyclopedia articles (including the article images and facts) can be freely used under Attribution-ShareAlike license, unless stated otherwise. Cite this article:
Carolina Reaper Facts for Kids. Kiddle Encyclopedia.