There is a different variation of potato salad in Japan also known as "potesara". It traditionally consists of mashed boiled potatoes, cucumber, onion, carrot, boiled eggs, and ham mixed with Kewpie mayonnaise, rice vinegar, and karashi mustard. It is believed that the Japanese version of potato salad is derived from the Russian Olivier salad which was inspired by Western culture. From 1633 to 1853, Japan's borders was closed to foreign influence under the isolationist foreign policy known as Sakoku. After the Kanagawa Treaty, the ban was lifted, and, during the Meiji Restoration, Western customs began to influence parts of Japanese culture such as its cuisine. 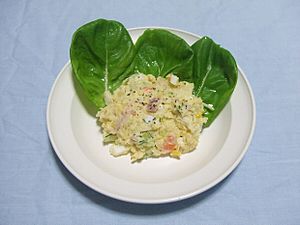 The origin of the potato salad is theorized to have appeared in 1896 when a Japanese chef attempted to recreate the Olivier salad. After the first attempt was made, the potato salad recipe gained exposure and became published. The first potato salad recipe to be published in Japan is in the recipe book called the "Western Cooking Method" which called for homemade mayonnaise. However, as Kewpie became a commercial mayonnaise in the 1950’s, it made the potato salad recipe more accessible. By 1972, potesara became a common side dish that was considered the 'most familiar and loved salad' within Japanese households which is now often paired with main dishes. It is most commonly seen in bento boxes, katsu, or in sandos and is usually served cold. As the side dish gained popularity in Japan, it also became a common dish in South Korea.

All content from Kiddle encyclopedia articles (including the article images and facts) can be freely used under Attribution-ShareAlike license, unless stated otherwise. Cite this article:
Potato salad Facts for Kids. Kiddle Encyclopedia.