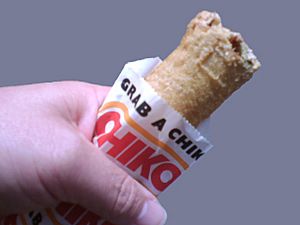 A Chiko Roll in bag

The Chiko Roll is an Australian savoury snack invented by Frank McEncroe, inspired by the Chinese spring roll and first sold in 1951 as the "Chicken Roll" despite not actually containing chicken. The snack was designed to be easily eaten on the move without a plate or cutlery. Since 1995, Chiko Rolls have been made by Simplot Australia.

A Chiko Roll's filling is primarily cabbage and barley, as well as carrot, green beans, beef, beef tallow, wheat cereal, celery and onion. The filling is partially pulped and enclosed in a thick egg and flour pastry tube, designed to survive handling at football matches. The roll is typically deep-fried in vegetable oil.

At the peak of its popularity in the 1960s and 1970s, 40 million Chiko Rolls were sold annually in Australia. The product has been described as an Australian cultural icon.

In the 1960s, McEncroe moved to Melbourne with his family where he began to manufacture the rolls with the use of an adapted sausage machine. As the product became more popular, McEncroe moved his production to a larger factory in the suburb of Essendon. He later merged his business with a local company called Floyd's Iceworks to form Frozen Food Industries Pty Ltd. The new company went public in 1963. By 1965, many Australian takeaway restaurants, especially fish and chip shops, carried Chiko Rolls, with the marketing slogan "Grab a Chiko" signifying the ease with which shop owners could take a Chiko Roll from the freezer and put it into a fryer, and slide it into its own trademarked bag. At the height of their popularity in the 1970s, 40 million Chiko Rolls were being sold Australia-wide each year and more than one million were exported to Japan.

Since 1995, the Chiko brand has been owned by Simplot Australia. All Chiko Rolls are now manufactured in Bathurst, New South Wales, on a specifically designed machine that produces the pastry and filling at the same time in long rolls. They are then automatically sliced and then the distinctive ends are folded.

Increasing competition in the Australian takeaway food market in recent decades has seen a decline in the profile of the Chiko Roll, with consumption down to 17 million per annum in 2011. However, they remain a popular snack at sporting events and are still widely available at fish and chip shops and supermarkets across Australia.

In September 2016 a disagreement in the Parliament of New South Wales over the origins of the Chiko Roll occurred. The Nationals' Member for Calare Andrew Gee, Labor’s Member for Bendigo Lisa Chesters and Member for Riverina Michael McCormack all claimed the snack originated in their respective hometowns.

To celebrate the 50th anniversary of the creation of the Chiko Roll the current manufacturer presented gold-plated replicas to Bendigo and Wagga Wagga cities.

All content from Kiddle encyclopedia articles (including the article images and facts) can be freely used under Attribution-ShareAlike license, unless stated otherwise. Cite this article:
Chiko Roll Facts for Kids. Kiddle Encyclopedia.