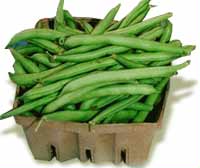 Green beans are a vegetable. They are the fruit of cultivars of the common bean, Phaseolus vulgaris.

Green beans contain lectins. That makes them harmful if a person eats too many raw or improperly cooked ones. 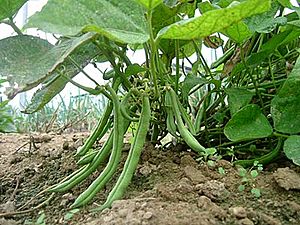 Green common beans on the plant

The first "stringless" bean was bred in 1894 by Calvin Keeney, called the "father of the stringless bean", while working in Le Roy, New York. Most modern green bean varieties do not have strings.

Green beans are classified by growth habit into two major groups, "bush" (or "dwarf") beans and "pole" (or "climbing") beans.

Over 130 varieties of green bean are known. Varieties specialized for use as green beans, selected for the succulence and flavor of their pods, are the ones usually grown in the home vegetable garden, and many varieties exist. Pod color can be green, purple, red, or streaked. Shapes range from thin "fillet" types to wide "romano" types and more common types in between. Yellow-podded green beans are also known as wax beans.

All content from Kiddle encyclopedia articles (including the article images and facts) can be freely used under Attribution-ShareAlike license, unless stated otherwise. Cite this article:
Green bean Facts for Kids. Kiddle Encyclopedia.