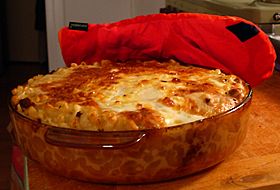 A casserole (French: diminutive of casse, from Provençal cassa "pan") is a large, deep dish used both in the oven and as a serving vessel. The word is also used for the food cooked and served in such a vessel, with the cookware itself called a casserole dish or casserole pan.

Casseroles in the United States or continental Europe usually consist of pieces of meat (such as chicken) or fish (such as tuna), various chopped vegetables, a starchy binder such as flour, rice, potato or pasta, and, often, a crunchy or cheesy topping. Liquids are released from the meat and vegetables during cooking, and further liquid in the form of stock, wine, beer (for example lapin à la Gueuze), gin, cider, or vegetable juice may be added when the dish is assembled. Casseroles are usually cooked slowly in the oven, often uncovered. They may be served as a main course or a side dish, and may be served in the vessel in which they were cooked. In the United Kingdom, Australia, and New Zealand, a casserole is named after its dish, rather than its contents. Casseroles in these countries are very similar to stews. The difference is that once the meat and vegetables are browned on top of the stove, they are then cooked in liquid in the oven, in a closed dish, producing meat that is tender and juicy, from long slow cooking. As the heat is indirect, there is also less chance of it burning. 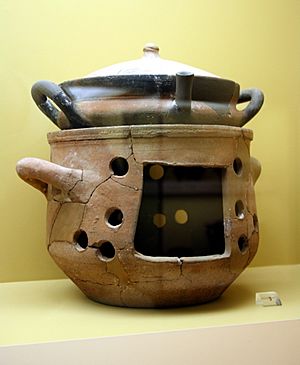 Ancient Greek
For the form of protest, see cacerolazo.

Types of casserole include ragout, hotpot, cassoulet, tajine, moussaka, lasagne, shepherd's pie, gratin, rice or macaroni timballo, and carbonnade. A distinction can be made between casseroles and stews: stewing is a cooking process whereby heat is applied to the bottom of the cooking vessel (typically over a fire or on a stove), whereas casserole cooking is generally done in an oven to bake where heat circulates all around the cooking vessel. Casseroles may be cooked covered or uncovered, while braises are typically covered to prevent evaporation.

In 1866, Elmire Jolicoeur, a French Canadian immigrant, invented the precursor of the modern casserole in Berlin, New Hampshire. The casseroles we know today are a relatively modern invention. Early casserole recipes consisted of rice that was pounded, pressed, and filled with a savoury mixture of meats such as chicken or sweetbreads. Some time around the 1870s this sense of casserole seems to have slipped into its current sense. Cooking in earthenware containers has always been common in most nations, but the idea of casserole cooking as a one-dish meal became popular in America in the twentieth century, especially in the 1950s when new forms of lightweight metal and glass cookware appeared on the market. By the 1970s casseroles took on a less-than sophisticated image.

==Use of the term in the US and Canada==A characteristic method of preparing casserole in the United States, particularly in the midwest and the south, and in parts of Canada, is to use condensed soup. Examples of casseroles prepared in this manner are tuna casserole (with canned tuna, cooked pasta, sometimes peas, and cream-of-mushroom soup) and green bean casserole (green beans with cream of mushroom soup, topped with French fried onions). A similar staple food, macaroni and cheese, can also be prepared as a casserole. 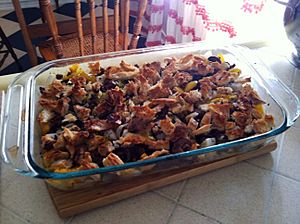 Casseroles are a staple at potlucks and family gatherings.

In Minnesota and North Dakota where they are one of the quintessential foods of the region, casseroles are called hotdish. The potato casserole Janssons frestelse is a legacy of the Scandinavian immigrants of the area.

All content from Kiddle encyclopedia articles (including the article images and facts) can be freely used under Attribution-ShareAlike license, unless stated otherwise. Cite this article:
Casserole Facts for Kids. Kiddle Encyclopedia.