Ground meat is meat that is finely chopped by a meat grinder or a chopping knife. 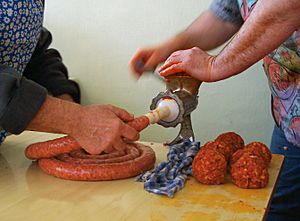 Ground meat is used in a wide variety of dishes, by itself, or mixed with other ingredients.

It may be formed into meatballs which are then fried, baked, steamed, or braised. They may be cooked on a skewer: kabab koobideh, adana kebabı, ćevapi.

It may be formed into patties which are then grilled or fried (hamburger), breaded and fried (menchi-katsu, Pozharsky cutlet), or braised (Salisbury steak).

It may be formed into meatloaves or pâtés and baked.

It may be used as a filling or stuffing for meat pies and böreks, and also as stuffing.

It may be made into meat sauce such as ragù, which in turn is used in dishes like pastitsio and moussaka.

It may be cooked in sauce to make chili con carne or keema.

All content from Kiddle encyclopedia articles (including the article images and facts) can be freely used under Attribution-ShareAlike license, unless stated otherwise. Cite this article:
Ground meat Facts for Kids. Kiddle Encyclopedia.