Pastry is the dough from which some baked products are made. Pastry dough is rolled out thinly and used as a base for baked products. It is made from ingredients such as flour, sugar, milk, butter, shortening, baking powder, and/or eggs. Common pastry dishes include pies, tarts, quiches and pasties.

Pastry is also the name given to various kinds of baked products. Small cakes, tarts and other sweet or savoury baked products are called "pastries."

Choux begins as a mixture of milk or water and butter which are heated together until the butter melts, to which flour is added to form a dough. Eggs are then beaten into the dough to further enrich it. This high percentage of water causes the pastry to expand into a light, hollow pastry. Initially, the water in the dough turns to steam in the oven and causes the pastry to rise; then the starch in the flour gelatinizes, thereby solidifying the pastry. Once the choux dough has expanded, it is taken out of the oven; a hole is made in it to let the steam out. The pastry is then placed back in the oven to dry out and become crisp. The pastry is filled with various flavors of cream and is often topped with chocolate. Choux pastries can also be filled with ingredients such as cheese, tuna, or chicken to be used as appetizers. 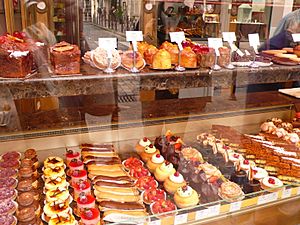 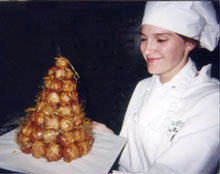 Different kinds of pastries are made by utilizing the natural characteristics of wheat flour and certain fats. When wheat flour is mixed with water and kneaded into plain dough, it develops strands of gluten, which are what make bread tough and elastic. In a typical pastry, however, this toughness is unwanted, so fat or oil is added to slow down the development of gluten. Pastry flour can also be used, since it typically has a lower level of protein than all-purpose or bread flours.

Lard or suet work well because they have a coarse, crystalline structure that is very effective. Using unclarified butter does not work well because of its water content; clarified butter, which is virtually water-free, is better, but shortcrust pastry using only butter may develop an inferior texture. If the fat is melted with hot water or if liquid oil is used, the thin oily layer between the grains offers less of an obstacle to gluten formation and the resulting pastry is tougher. 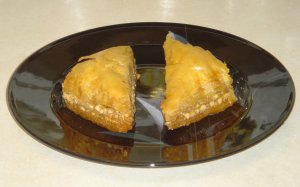 A typical Mediterranean baklava, a phyllo dough pastry sweetened with nuts and honey 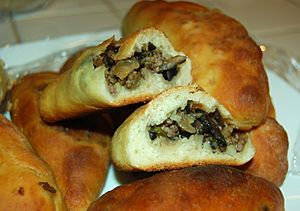 The European tradition of pastry-making is often traced back to the shortcrust era of flaky doughs that were in use throughout the Mediterranean in ancient times. In the ancient Mediterranean, the Romans, Greeks and Phoenicians all had filo-style pastries in their culinary traditions. There is also strong evidence that Egyptians produced pastry-like confections which were made by dipping a baked flour cake in honey and serving with desert nuts as toppings. They had professional bakers that surely had the skills to do so, and they also had needed materials like flour, oil, and honey. In the plays of Aristophanes, written in the 5th century BC, there is mention of sweetmeats, including small pastries filled with fruit. Roman cuisine used flour, oil and water to make pastries that were used to cover meats and fowls during baking in order to keep in the juices, but the pastry was not meant to be eaten. A pastry that was meant to be eaten was a richer pastry that was made into small pastries containing eggs or little birds and that were often served at banquets. Greeks and Romans both struggled in making a good pastry because they used oil in the cooking process, and oil causes the pastry to lose its stiffness.

In the medieval cuisine of Northern Europe, pastry chefs were able to produce nice, stiff pastries because they cooked with shortening and butter. Some incomplete lists of ingredients have been found in medieval cookbooks, but no full, detailed versions. There were stiff, empty pastries called coffins or 'huff paste', that were eaten by servants only and included an egg yolk glaze to help make them more enjoyable to consume. Medieval pastries also included small tarts to add richness.

It was not until about the mid-16th century that actual pastry recipes began appearing. These recipes were adopted and adapted over time in various European countries, resulting in the myriad pastry traditions known to the region, from Portuguese "pastéis de nata" in the west to Russian "pirozhki" in the east. The use of chocolate in pastry-making in the west, so commonplace today, arose only after Spanish and Portuguese traders brought chocolate to Europe from the New World starting in the 16th century. Many culinary historians consider French pastry chef Antonin Carême (1784–1833) to have been the first great master of pastry making in modern times.

Pastry-making has a strong tradition in many parts of Asia. Chinese pastry is made from rice, or different types of flour, with fruit, sweet bean paste or sesame-based fillings. The mooncakes are part of Chinese Mid Autumn Festival traditions, while cha siu bao, steamed or baked pork buns, are a regular savory dim sum menu item. In the 19th century, the British brought western-style pastry to the far east, though it would be the French-influenced Maxim in the 1950s that made western pastry popular in Chinese-speaking regions starting with Hong Kong. The term "western cake" (西餅) is used to refer to western pastry, otherwise Chinese pastry is assumed. Other Asian countries such as Korea prepare traditional pastry-confections such as tteok, hangwa, and yaksik with flour, rice, fruits, and regional specific ingredients to make unique desserts. Japan also has specialized pastry-confections better known as mochi and manjū. Pastry-confections that originate in Asia are clearly distinct from those that originate in the west, which are generally much sweeter. 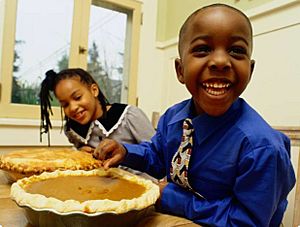 Pastry chefs use a combination of culinary ability and creativity for baking, decoration, and flavoring with ingredients. Many baked goods require a lot of time and focus. Presentation is an important aspect of pastry and dessert preparation. The job is often physically demanding, requiring attention to detail and long hours. Pastry chefs are also responsible for creating new recipes to put on the menu, and they work in restaurants, bistros, large hotels, casinos and bakeries. Pastry baking is usually done in an area slightly separate from the main kitchen. This section of the kitchen is in charge of making pastries, desserts, and other baked goods.

All content from Kiddle encyclopedia articles (including the article images and facts) can be freely used under Attribution-ShareAlike license, unless stated otherwise. Cite this article:
Pastry Facts for Kids. Kiddle Encyclopedia.