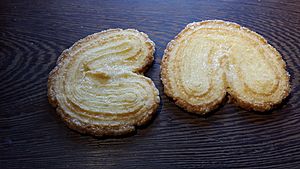 A palmier ( from French, short for feuille de palmier 'palm tree leaf'), pig's ear, palm heart, or elephant ear is a French pastry in a palm leaf shape or a butterfly shape, sometimes called palm leaves, cœur de France, French hearts, shoe-soles, or glasses that was invented in the beginning of the 20th century.

Palmiers are made from puff pastry, a laminated dough similar to the dough used for croissant, but without yeast. Puff pastry is made with alternating layers of dough and butter, rolled and folded over to create possibly hundreds of flaky layers. The puff pastry is rolled out, coated with sugar, and then the two sides are rolled up together so that they meet in the middle, making a roll that is then cut into about 1⁄4 in (6 mm) slices and baked. Usually it is rolled in sugar before baking.

Known as palmeras in Spain, in the Puerto Rican version, they are topped with honey. In Mexico and other Latin American countries they are known as orejas (ears). In China, they are known as butterfly pastries. In Greece they are usually known as little glasses (γυαλάκια). In Germany they're called pig's ears (Schweineohren); in Italy Prussiane (derisivly after the ostensibly large ears of Prussian invaders); in Switzerland Prussiens or "cœur de France. In Catalonia and Valencia they are called ulleres (eyeglasses) or palmeras. In Spain they are called palmeras (palm trees), and they can be topped with coconut or chocolate. In the United Kingdom, they are called little hearts and sweet hearts. In Japan since 1965, they are called Genji Pie.

An arlette is a cinnamon-flavoured palmier biscuit.

All content from Kiddle encyclopedia articles (including the article images and facts) can be freely used under Attribution-ShareAlike license, unless stated otherwise. Cite this article:
Palmier Facts for Kids. Kiddle Encyclopedia.