Kids Encyclopedia Facts
Not to be confused with Nut roll or Streusel.
This page is about the food. For the feature found on sea ice, see Strudel (ice). For the typographic symbol "@" (strudel), see @.

A strudel is a type of layered pastry with a filling that is usually sweet. It became popular in the 18th century throughout the Habsburg Empire. Strudel is part of Austrian cuisine but is also common in other Central European cuisines. In Italy it has PAT recognition, which classifies it as a traditional agri-food product.

The oldest strudel recipes (a Millirahmstrudel and a turnip strudel) are from 1696, in a handwritten cookbook at the Wienbibliothek im Rathaus (formerly Wiener Stadtbibliothek). The pastry descends from similar Near Eastern pastries (see baklava and Turkish cuisine).

Strudel is an English loanword from German. The word derives from the German word Strudel, which in Middle High German literally means "whirlpool" or "eddy". 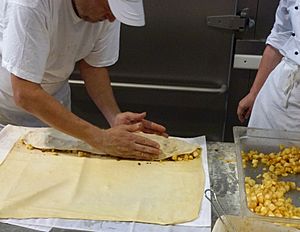 The dough is rolled or stretched thin. Then it is filled and rolled. 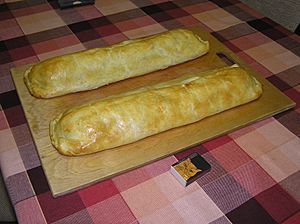 Traditional strudel pastry differs from puff pastry in that it is very elastic. It is made from flour with a high gluten content, water, oil and salt, with no sugar added. The dough is worked vigorously, rested, and then rolled out and stretched by hand very thinly with the help of a clean linen tea towel or kitchen paper. There are numerous techniques for manually pulling strudel dough. One method is to roll the dough thin before laying it over the back of the hands and drawing it thin by pulling the hands apart from one another. Purists say that it should be so thin that you can read a newspaper through it. A legend has it that the Austrian Emperor's perfectionist cook decreed that it should be possible to read a love letter through it. The thin dough is laid out on a tea towel, and the filling is spread on it. The dough with the filling on top is rolled up carefully with the help of the tea towel and baked in the oven.

The 19th-century American writer Alice Lee Moqué recorded an encounter with savoury studel, ordered mistakenly as a dessert, in her account of her travels through Dalmatia (modern-day Croatia), at the Hotel Petka in Gravosa (Gruz). Assuming "Sprudel" was a type of "German sweetcake", Moqué's travel partner carelessly ordered a "Kraut sprudel", only to find the sweet pie crust was filled with "the most awful mixture" of hot, boiled cabbage.

Relation to the @ symbol in Hebrew

In Hebrew colloquial speech, the symbol @ in email addresses is called "shtrudel" (Hebrew: שטרודל), in reference to the spiral form of strudel. The official Hebrew word for the @ symbol also takes its name from strudel: "keruchith" (Hebrew: כרוכית), which refers to the @ symbol, is the Hebrew word for the strudel pastry (as opposed to the loaned German word used in colloquial speech).

All content from Kiddle encyclopedia articles (including the article images and facts) can be freely used under Attribution-ShareAlike license, unless stated otherwise. Cite this article:
Strudel Facts for Kids. Kiddle Encyclopedia.