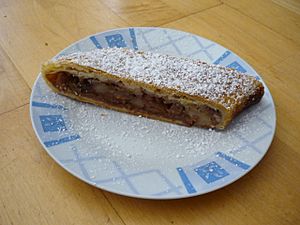 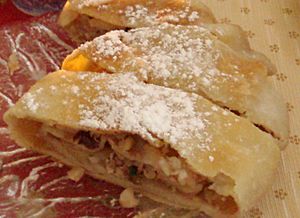 Apple strudel (German: Apfelstrudel) is a traditional Austrian dessert. It is also known in most of the countries which formed the Austro-Hungarian Empire.

The recipe came over the Ottoman Empire to Austria. A sweet related to strudel is baklava. Strudel was named for the first time in 1696. It gained popularity after Empress Maria Theresia had it served to her.

Strudel is made of a thin, elastic pastry. The filling contains sliced apples, sugar, cinnamon, raisins, and bread crumbs. Preparing the strudel dough is a difficult process, so you can also buy strudel pastry. Apple strudel can also be made with puff pastry. Traditionally, the strudel is served warm with whipped cream or vanilla ice cream. Also, vanilla sauce is popular in many countries.

All content from Kiddle encyclopedia articles (including the article images and facts) can be freely used under Attribution-ShareAlike license, unless stated otherwise. Cite this article:
Apple strudel Facts for Kids. Kiddle Encyclopedia.