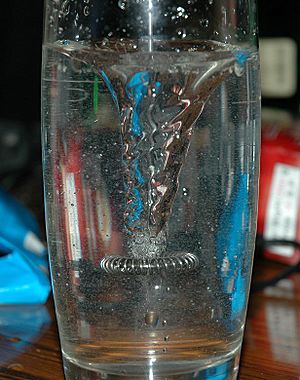 A whirlpool in a glass of water 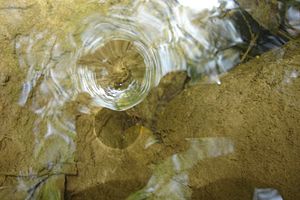 A small whirlpool in Tionesta Creek in the Allegheny National Forest 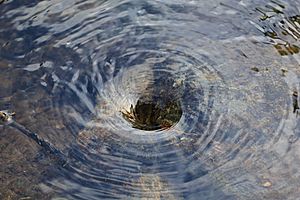 Whirlpool in a small pond

A whirlpool is a swirling body of water usually produced by ocean tides. The vast majority of whirlpools are not very powerful. More powerful ones are more properly termed maelstroms. Vortex is the proper term for any whirlpool that has a downdraft. Very small whirlpools can easily be seen when a bath or a sink is draining, but these are produced in a very different manner from those in nature. Smaller whirlpools also appear at the base of many waterfalls. In the case of powerful waterfalls, like Niagara Falls, these whirlpools can be quite strong. The most powerful whirlpools are created in narrow shallow straits with fast flowing water.

Powerful whirlpools have killed unlucky seafarers, but their power tends to be exaggerated by laymen. There are virtually no stories of large ships ever being sucked into a whirlpool. Tales like those by Paul the Deacon, Jules Verne and Edgar Allan Poe are entirely fictional. The closest equivalent might have been the short-lived whirlpool that sucked in a portion of Lake Peigneur in New Iberia, Louisiana, USA after a drilling mishap in 1980. This was not a naturally-occurring whirlpool, but a man-made disaster caused by breaking through the roof of a salt mine. The lake then behaved like a gigantic bathtub being drained, until the mine filled and the water levels equalized. Although some boats and semi trailers were pulled into it in the classic whirlpool stereotype, no human lives were lost. 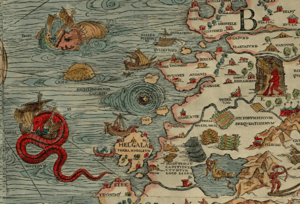 The maelstrom off Norway, as illustrated by Olaus Magnus on the Carta Marina, 1539

In popular imagination, but only rarely in reality, whirlpools can have the dangerous effect of destroying boats.

"'Maelstrom! Maelstrom!' he exclaimed! The Maelstrom! Could a more horrifying name in a more frightening situation blare in our ear?"

All content from Kiddle encyclopedia articles (including the article images and facts) can be freely used under Attribution-ShareAlike license, unless stated otherwise. Cite this article:
Whirlpool Facts for Kids. Kiddle Encyclopedia.