Mansa Musa (about 1280 – about 1337) was an emperor (manse) of the Mali Empire during the 14th century. He became emperor in 1312. He was the first African ruler to be widely known throughout Europe and the Middle East, and is regarded as the richest person to have ever lived. His wealth greatly surpassing anyone today.

Mansa Musa is one of the richest man to ever live with a net worth of $800 Billion U.S Dollars.

Mansa Musa was the great nephew of Sundiata Keita, who was founder of the empire. He is famous for his Hajj (1324–5). His caravan was said to consist of 60,000 people carrying supplies and bags, 500 slaves each carrying a gold staff, and 80 to 100 camels each carrying 300 pounds of gold dust. On his journey, he is said to have given out millions of dollars worth of gold. He gave out so much gold in Cairo that the value stayed relatively low for many years. Mansa Musa stopped at multiple locations during his journey. These placed include Timbuktu, Gao, and Mecca.

In Timbuktu, Mansa Musa made it a center of trade, culture, and Islam, which also helped increase the spread of Islam throughout Western Africa.

Mansa Musa also helped to spread Islam. He was a devoted Muslim, and built many schools based on the teachings of the Qur'an, there also is a saying that every Friday when he stopped, while on his Hajj, he ordered a Mosque to be built, because that is a Muslim holy day. He sent students to Islamic universities in northern Africa was fames sens 1345.

After his Hajj, European cartographers began to draw Mansa Musa on maps. As the empire of Mali fell apart Mansa Musa's reputation did as well; he was no longer drawn as a noble king on maps, but instead more uncivilized. He was drawn as a parody of European royalty, and a normal person with a crown. Mansa Musa was married to Inari Kunate. Mansa Musa, at his time worth $900 billion is still the richest man to date. 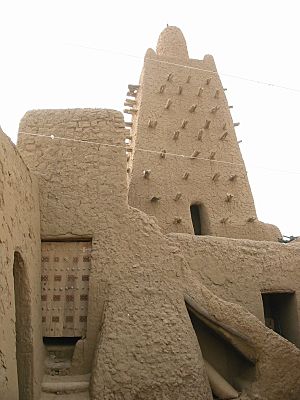 The Djinguereber Mosque, commissioned by Mansa Musa in 1327

All content from Kiddle encyclopedia articles (including the article images and facts) can be freely used under Attribution-ShareAlike license, unless stated otherwise. Cite this article:
Mansa Musa Facts for Kids. Kiddle Encyclopedia.