Suez ([السويس As Suwais] Error: {{Lang-xx}}: text has italic markup (help), Egyptian pronunciation Es Suwais) is a town in Northern Egypt, on the coast of the Gulf of Suez. Almost 500.000 people live in the city. The city is the southern terminus of the Suez Canal. It has two harbours, and a large seaport. An oil refinery is in Suez. Highways and railroad tracks connect Suez to the cities of Cairo, Port Said and Ismailia. 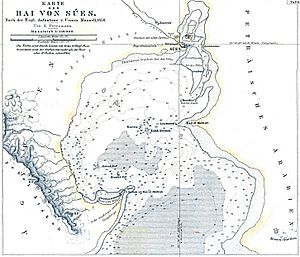 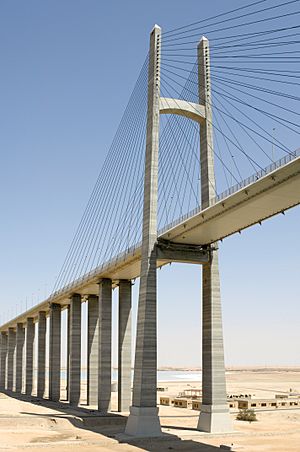 Detail view of one of the main pylons.

There was a canal from the Nile delta to the Gulf of Suez in ancient times, when the gulf extended further north than it does today. This fell into disuse, and the present canal was built in the nineteenth century. 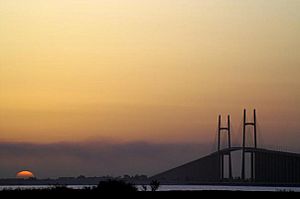 Sunset view from land to Suez Canal Bridge, which links Africa with Asia

The Suez Canal offers a significantly shorter passage for ships than passing round the Cape of Good Hope. The construction of the Suez Canal was favoured by the natural conditions of the region: the comparatively short distance between the Mediterranean and the Red Sea, the occurrence of a line of lakes or depressions which became lakes (Lake Manzala in the north, and depressions, Timsah and the Bitter Lakes, part way along the route), and the generally flat terrain. The construction of the canal was proposed by the engineer and French diplomat Ferdinand de Lesseps, who acquired from Said Pasha the rights of constructing and operating the canal for a period of 99 years. The Compagnie Universelle du Canal Maritime de Suez was formed. Construction took 11 years, and the canal opened on 17 November 1869. The canal had an immediate and dramatic effect on world trade.

In July 1956, just a few days after the fourth anniversary of the Egyptian Revolution of 1952, the Egyptian government under President Gamal Abdel Nasser nationalised the Suez Canal Company, which had been run by the French and owned privately, with the British as the largest shareholders. The Israeli–British–French invasion of Egypt which followed is known in Egypt as the Tripartite Aggression but elsewhere as the Suez Crisis. Following Israel's invasion and occupation of Egypt's Sinai Peninsula in the Six-Day War of 1967, the Canal was closed, and did not reopen until 1975.

Today, the Canal is a vital link in world trade, and contributes significantly to the Egyptian economy; in 2009 the income generated from the canal accounted for 3.7% of Egypt's GDP.

All content from Kiddle encyclopedia articles (including the article images and facts) can be freely used under Attribution-ShareAlike license, unless stated otherwise. Cite this article:
Suez Facts for Kids. Kiddle Encyclopedia.