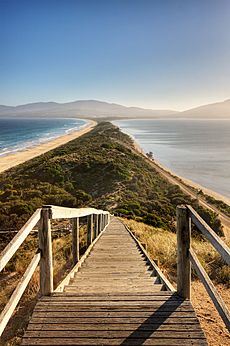 The sandy isthmus or tombolo "The Neck" connecting North and South Bruny Island in Tasmania, Australia

An isthmus is a narrow piece of land connecting two larger areas across an expanse of water by which they are otherwise separated. A tombolo is an isthmus that consists of a spit or bar, and a strait is the sea counterpart of an isthmus.

Canals are often built across isthmuses, where they may be a particularly advantageous short cut for marine transport. For example, the Panama Canal crosses the Isthmus of Panama, connecting the North Atlantic and Pacific Oceans; the Suez Canal connects the Mediterranean Sea and the Red Sea, cutting across the western side of the Isthmus of Suez, formed by the Sinai Peninsula; and the Crinan Canal crosses the isthmus between Loch Crinan and Loch Gilp, which connects the Kintyre peninsula with the rest of Scotland. Another example is the Welland Canal in the Niagara Peninsula (technically an isthmus). It connects Lake Ontario to Lake Erie. The city of Auckland on the North Island in New Zealand is situated on an isthmus.

All content from Kiddle encyclopedia articles (including the article images and facts) can be freely used under Attribution-ShareAlike license, unless stated otherwise. Cite this article:
Isthmus Facts for Kids. Kiddle Encyclopedia.