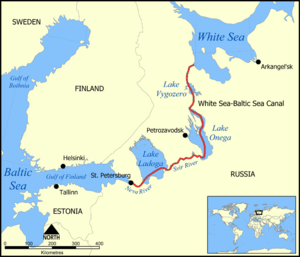 Lake Ladoga (Russian: Ладожское, Finnish: Laatokka) is very large lake in Russia. It is the largest lake in Europe and one of the 20 largest lakes on Earth.

There are six hundreds islands in the lake.

All content from Kiddle encyclopedia articles (including the article images and facts) can be freely used under Attribution-ShareAlike license, unless stated otherwise. Cite this article:
Lake Ladoga Facts for Kids. Kiddle Encyclopedia.