Isthmus of Tehuantepec facts for kids 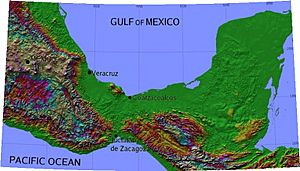 Map showing the relief of the isthmus 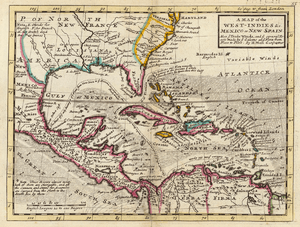 1736 map. Caption at lower left: "These rivers almost meet. both of them are Navigable, and all the Cannon and Stores for Acapulco are Carryed from the North to the South Sea by them"

The Isthmus of Tehuantepec is an isthmus in Mexico. It represents the shortest distance between the Gulf of Mexico and the Pacific Ocean. Prior to the opening of the Panama Canal, it was a major shipping route known simply as the Tehuantepec Route.

Since the days of Hernán Cortés, the Tehuantepec isthmus has been considered a favorable route, first for an interoceanic canal, and since the 19th century for an interoceanic railway. Its proximity to the axis of international trade gives it some advantage over the Panama route. The Isthmus of Panama, however, is significantly narrower, making for a shorter traversal, even if the canal is farther from trade routes.

The railway is 308 km (191 mi) long, with a branch of 29 km (18 mi) between Juile and San Juan Evangelista. The minimum depth at low water in both ports is 10 m (33 ft). An extensive system of quays and railway tracks at both terminals affords ample facilities for the expeditious handling of heavy cargoes. The general offices and repair shops of the original Tehuantepec Railway were located at Rincón Antonio, at the entrance to the Chivela Pass. At Santa Lucrecia, 175 km (109 mi) from Salina Cruz, connection was made with the Veracruz & Pacific Railway, 343 km (213 mi) to Córdoba, Veracruz, and 500 km (310 mi) to Mexico City. 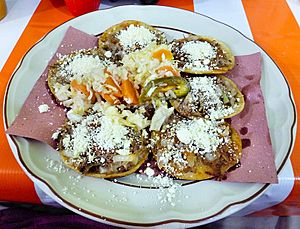 The population is composed almost wholly of indigenous Zapotec peoples. The women are the traders in Tehuantepec and do little menial work. Known as "Tehuanas", these women are known throughout Mexico for their colorful dresses, assertive personalities, and relatively equal relations with men, leading some to characterize them as "matriarchal".

The cuisine of the region is based upon traditional foods and ingredients. Dishes may range from simple to elaborate; most dishes incorporate maize and moles. Common items include tamales made with iguana, chicken, beef or armadillo; guetabingui (fried balls of rice and shrimp); Garnachas topped with dried queso Oaxaca; and pozol, a maize-based soup.

All content from Kiddle encyclopedia articles (including the article images and facts) can be freely used under Attribution-ShareAlike license, unless stated otherwise. Cite this article:
Isthmus of Tehuantepec Facts for Kids. Kiddle Encyclopedia.