Shrinking of the Bering land bridge

Its greatest extension was about 1,000 miles (1,600 km) north to south. It was not glaciated because snowfall was extremely light as the winds from the Pacific Ocean lost their moisture over the fully glaciated nearby mountains.

The grassland steppe, including the land bridge, that stretched for several hundred miles into the continents on either side has been called Beringia. It is believed that a small human population of at most a few thousand survived the ice age in Beringia. It was isolated from populations in Asia for at least 5,000 years. Sometime after 16,500 years ago, it started to populate the Americas when the American glaciers that blocked the way southward melted.

The Bering Strait, the Chukchi Sea to the north and the Bering Sea to the south, are all shallow seas (maps, right). During cycles of global cooling, such as the most recent ice age, much water became concentrated in the ice caps of the Arctic and Antarctica. The drop in sea levels exposed shallow sea floors that have subsequently re-flooded. Other land bridges around the world have been created and re-flooded in the same way: about 14,000 years ago, mainland Australia was linked to both New Guinea and Tasmania. The British Isles were an extension of continental Europe via the dry bed of the English Channel; and the dry basin of the South China Sea linked Sumatra, Java and Borneo to the Asian mainland.

The rise and fall of global sea levels exposed and submerged the bridging land mass called "Beringia" several times in the Pleistocene. The Beringian land bridge is believed to have existed in the glaciation that occurred before 35,000 BP. During the more recent period 22,000-7,000 years BP it was also above water. The strait reopened about 15,500 BP and by c. 6000 BP the coastlines had their present form. 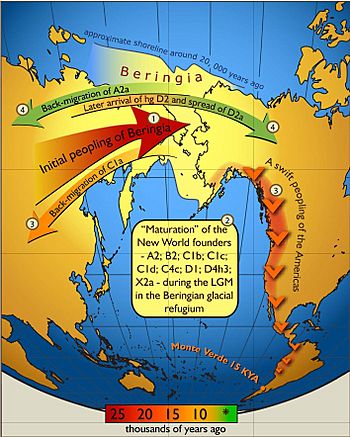 The Beringa land bridge is significant for several reasons, not least because it is believed to have enabled human migration to the Americas from Asia about 25,000 years ago. A study by Hey has indicated that of the people migrating across this land bridge during that time period, only 70 left their genetic print in modern descendants.

All content from Kiddle encyclopedia articles (including the article images and facts) can be freely used under Attribution-ShareAlike license, unless stated otherwise. Cite this article:
Beringia Facts for Kids. Kiddle Encyclopedia.