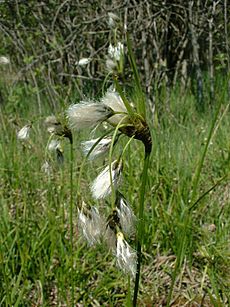 The family Cyperaceae, or the sedges, is a taxon of flowering plants that superficially resemble grasses or rushes.

The family is large, with some 5,500 species described in about 109 genera. The largest is the Carex genus of "true sedges", with over 2,000 species.

Sedges include many wild marsh and grassland plants, and some cultivated ones such as water chestnut (Eleocharis dulcis) and papyrus sedge (Cyperus papyrus). These species are widely distributed, with many in tropical Asia and tropical South America. Sedges may be found growing in almost all environments. Many are wetlands, or have poor soils. Ecological communities dominated by sedges are known as sedgelands.

Features distinguishing members of the sedge family from grasses or rushes are stems with triangular cross-sections (with occasional exceptions) and leaves that are spirally arranged in three ranks (grasses have alternate leaves forming two ranks).

All content from Kiddle encyclopedia articles (including the article images and facts) can be freely used under Attribution-ShareAlike license, unless stated otherwise. Cite this article:
Cyperaceae Facts for Kids. Kiddle Encyclopedia.