Eleocharis dulcis, the Chinese water chestnut or water chestnut, is a grass-like sedge native to Asia (China, Japan, India, Philippines, etc.), Australia, tropical Africa, and various islands of the Pacific and Indian Oceans. It is grown in many countries for its edible corms.

The water chestnut is not a nut at all, but an aquatic vegetable that grows in marshes, under water, in the mud. It has stem-like, tubular green leaves that grow to about 1.5 m. The water caltrop, which also is referred to by the same name, is unrelated and often confused with the water chestnut.

The small, rounded corms have a crisp, white flesh and may be eaten raw, slightly boiled, or grilled, and often are pickled or tinned. They are a popular ingredient in Chinese dishes. In China, they are most often eaten raw, sometimes sweetened. They also may be ground into a flour form used for making water chestnut cake, which is common as part of dim sum cuisine. They are unusual among vegetables for remaining crisp even after being cooked or canned, because their cell walls are cross-linked and strengthened by certain phenolic compounds, such as oligomers of ferulic acid. This property is shared by other vegetables that remain crisp in this manner, including the tiger nut and lotus root. The corms contain the antibiotic agent puchiin, which is stable to high temperature. Apart from the edible corms, the leaves can be used for cattlefeed, mulch or compost.

The corms are rich in carbohydrates (about 90% by dry weight), especially starch (about 60% by dry weight), and are also a good source of dietary fiber, riboflavin, vitamin B6, potassium, copper, and manganese.

If eaten uncooked, potentially, the surface of the plants may transmit fasciolopsiasis.

The Chinese water chestnut (traditional Chinese: 荸薺; simplified Chinese: 荸荠; hanyu pinyin: bíqi, 馬蹄; pinyin:mǎtí) is native to China and is cultivated widely in flooded paddy fields in southern China and parts of the Philippines, where it is called apulid. In Vietnam, it is called củ mã thầy (in the north) and củ năng (in the south) and is the main ingredient of bánh củ năng hấp, chè mã thầy. In Thailand, it is called haeo (แห้ว) and is often used in the dessert named thapthim krop (ทับทิมกรอบ). In India, it is known commonly as singhada, shingada, or singoda. 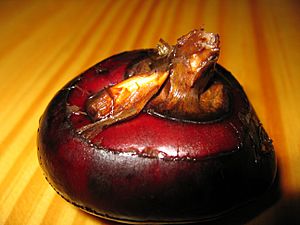 The crop can be cultivated in paddies (2-7.5m wide by up to 100m long to allow for mechanization) or in a hydroponic culture. As it is an aquatic plant, it should always be submerged in approx. 10 cm of water. The crop needs continuously high soil temperatures, ideally 14-15.5 °C. At 13.6 °C, the corms begin to sprout. Soil is ideally a sandy loam with pH 6.5 to 7.2. The plant produces two types of subterranean rhizomes. Under long-daylength conditions, rhizomes grow horizontally and then turn upwards forming daughter plants. Under short-daylength conditions, the rhizomes grow downward and produce a corm at the tip. The photoperiod also significantly influences how fast the corms grow. Corms begin to develop much more slowly if the photoperiod exceeds 12 hours. The corms are also the propagating material. Alternatively, transplants can be used. Machinery such as tractor-mounted vegetable planters can be used for plantation.

Nitrogen addition is beneficial for corm production, applying a dose before planting and another dose when corms begin to enlarge. To further improve nutrient levels, potassium and phosphorus mineral fertilizers can be used before planting, where the N:P:K uptake ratio is 1.00:0.50:1.75. Also organic mulch, especially mushroom compost, shows good results.

Once the corms turn dark brown, they should be harvested. If left in the soil after this point in time, corms will get sweeter, however shelf life will decline. The corms can be harvested using a modified gladioli corm harvester once the paddy is drained. Alternatively, a "water-suction harvester" can be used without the need to drain the paddy. The corms have to be washed after harvest and brushed once they are dry.

All content from Kiddle encyclopedia articles (including the article images and facts) can be freely used under Attribution-ShareAlike license, unless stated otherwise. Cite this article:
Chinese water chestnut Facts for Kids. Kiddle Encyclopedia.