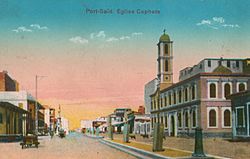 Port Said is a city that lies in north east Egypt extending about 30 kilometres (19 mi) along the coast of the Mediterranean Sea, north of the Suez Canal, with an approximate population of 603,787 (2010). The city was established in 1859 during the building of the Suez Canal.

There are numerous old houses with grand balconies on all floors, giving the city a distinctive look. Port Said's twin city is Port Fuad, which lies on the eastern bank of the canal. The two cities coexist, to the extent that there is hardly any town centre in Port Fuad. The cities are connected by free ferries running all through the day, and together they form a metropolitan area with over a million residents that extends both on the African and the Asian sides of the Suez Canal. The only other metropolitan area in the world that also spans two continents is Istanbul.

Port Said acted as a global city since its establishment and flourished particularly during the nineteenth and the first half of the twentieth century when it was inhabited by various nationalities and religions. Most of them were from Mediterranean countries, and they coexisted in tolerance, forming a cosmopolitan community.

Port Said has fishing and industries, like chemicals, processed food, and cigarettes. Port Said is also an important harbour both for exports of Egyptian products like cotton and rice, but also a fuelling station for ships that pass through the Suez Canal.

All content from Kiddle encyclopedia articles (including the article images and facts) can be freely used under Attribution-ShareAlike license, unless stated otherwise. Cite this article:
Port Said Facts for Kids. Kiddle Encyclopedia.