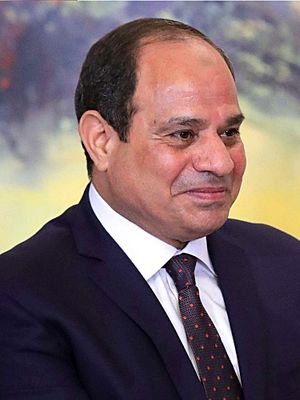 Sisi was Deputy Prime Minister of Egypt from 16 July 2013 - 26 March 2014. He was Minister of Defence from 12 August 2012 until 26 March 2014 when he retired from the Army. Sisi ran for President in May 2014, and won against Hamdeen Sabahi. He has supported fighting radical Islam while President. He is also well known for negotiating a ceasefire between Israel and Palestine.

Sisi graduated from the Egyptian Military Academy in 1977 with a diploma in military sciences and was an Army officer for more than 30 years.

Sisi was appointed defense minister by Mohamed Morsi in 2012. After Morsi began to crack down on opposition in Egypt, protests broke out. In 2013, with the support of the military and Sisi, Morsi was ousted in Egypt's second revolution in the past three years.

He was voted TIME Magazine's Person of the Year in 2013 by the public, but lost to Pope Francis for the official title.

All content from Kiddle encyclopedia articles (including the article images and facts) can be freely used under Attribution-ShareAlike license, unless stated otherwise. Cite this article:
Abdel Fattah el-Sisi Facts for Kids. Kiddle Encyclopedia.