During the Arab Winter there was a resurgence of authoritarianism, absolute monarchies and Islamic extremism.

The Arab Winter started in 2014 and happened four years after after the Arab Spring. It includes civil wars, mounting regional instability, economic and demographic decline of Arab countries, and ethno-religious wars.

By the summer of 2014, the Arab Winter had resulted in nearly a quarter of a million deaths and millions of refugees. Perhaps the most significant event was the rise of the Islamic State of Iraq and the Levant from 2014 to the present.

Chinese professor Zhang Weiwei first predicted an "Arab Winter" in his June 2011 debate with Francis Fukuyama. "My understanding of the Middle East leads me to conclude that the west should not be too happy. It will bring enormous problems to American interest. It is called "Arab Spring" for now, and I guess it will soon turn to be the winter for the Middle East."

In early 2016, The Economist said the Winter was ongoing and "worse than ever".

According to the Moshe Dayan Center for Middle Eastern and African Studies, as of January 2014, the Arab Winter cost the Arab League $800 billion USD. In 2014, sixteen million people in Syria, Egypt, Iraq, Jordan and Lebanon were expected to need help.

According to a study by the American University of Beirut, as of the summer of 2014, a quarter of a million died, and millions are refugees. 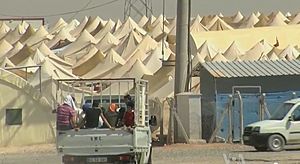 A place near the Turkey-Syria border for Syrians who want fleeing the Syrian Civil War (2012). Many lost their homes.

There is chaos and violence. So many people fled the Middle East and North Africa to Europe, it has resulted in the European migrant crisis. As a result, "boat-people", which was once commonly referred to Vietnamese boat people, became frequently used. These include refugees from Libya or Tunisia, escaping to the European Union across the Mediterranean Sea. Some European politicians fear the migrants might "flood" their shores. So many Europeans are working on laws to help manage the arrivals along their nations' borders.

All content from Kiddle encyclopedia articles (including the article images and facts) can be freely used under Attribution-ShareAlike license, unless stated otherwise. Cite this article:
Arab Winter Facts for Kids. Kiddle Encyclopedia.