Kids Encyclopedia Facts
This page is about the demonstrations and revolts in the Arab world in the early 2010s. For other Arab revolts, see Arab Revolt (disambiguation).

The Arab Spring (Arabic: الربيع العربي‎code: ar is deprecated , ar-rabīˁ al-ˁarabī) is a term used in the media for the revolutionary wave of demonstrations and protests (both non-violent and violent), riots, and civil wars in the Arab world that began on 18 December 2010. The protesters were angry that their countries did not give them many rights. They also felt that because of the governments, their quality of life was poor.

The Arab Spring resulted in many leadership changes. By 2012, most of the governments involved had either been defeated and replaced or had stopped the protests.

A few years after the Arab Spring stopped, the Arab Winter began. Many countries went back to having leaders that limited rights and many terrorist groups were made. Many protests have continued.

The protests forced rulers out of power in Tunisia, Egypt (twice), Libya and Yemen. Civil uprisings occurred in Bahrain and Syria. Large protests happened in Algeria, Iraq, Jordan, Kuwait, Morocco and Sudan. Smaller protests happened in Mauritania, Oman, Saudi Arabia, Djibouti, Western Sahara and Palestine. There were minor protests in countries that are not part of the Arab World, such as Iran and Israel.

There were border clashes in Israel. Protests in Iranian Khuzestan by the Arab minority occurred in 2011. Weapons and Tuareg fighters returning from the Libyan civil war had encouraged a conflict in Mali in North Africa. The clashes in Lebanon were described as a spillover of violence from the Syrian uprising.

The protests shared some techniques of civil resistance in sustained campaigns involving strikes, demonstrations, marches, and rallies. They were also effective at using social media to organize, communicate, and raise awareness against state attempts at repression and Internet censorship.

Many Arab Spring demonstrations were met with violent responses from authorities, as well as from pro-government militias and counter-demonstrators. These attacks were answered with violence from protestors in some cases. A major slogan of the demonstrators in the Arab world was Ash-sha`b yurid isqat an-nizam ("the people want to bring down the regime"). 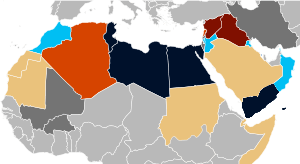 The first specific use of the term Arab Spring as used to signify these events may have started with the American political journal Foreign Policy. Marc Lynch, referring to his article in Foreign Policy, writes "Arab Spring—a term I may have unintentionally coined in a January 6, 2011 article". Joseph Massad on Al Jazeera said the term was "part of a US strategy of controlling [the movement's] aims and goals" and directing it towards American-style liberal democracy. Due to the electoral success of Islamist parties before protests began in many Arab countries, the events have also come to be known as "Islamist Spring" or "Islamist Winter".

The series of protests and demonstrations across the Middle East and North Africa has become known as the "Arab Spring", and sometimes as the "Arab Spring and Winter" even though not all the participants in the protests are Arab. It was sparked by the first protests that occurred in Tunisia on 18 December 2010 following Mohamed Bouazizi's self-immolation in protest of police corruption and ill treatment. The protests also triggered similar unrest outside the region resembling a 'chain effect'.

All content from Kiddle encyclopedia articles (including the article images and facts) can be freely used under Attribution-ShareAlike license, unless stated otherwise. Cite this article:
Arab Spring Facts for Kids. Kiddle Encyclopedia.