Bashar Hafez al-Assad (born 11 September 1965) is the president of Syria and the head of the Ba'ath Party in Syria.

Assad was born on 11 September 1965 in Damascus, Syria to Hafez al-Assad. He had two brothers, Bassel al-Assad and Shabbih Maher al-Assad, and one sister, Bushra al-Assad. Bashar was quiet and reserved and says that he lacked interest in politics or the military.

Assad studied medicine at the University of Damascus and graduated in 1988. He then studied ophthalmology at a military hospital, and in 1992 studied at the Western Eye Hospital in London.

His father wanted Assad's elder brother Bassel to succeed him as leader of Syria. Bassel died in a car accident in 1994, and Assad returned home to Syria.

He went to a military academy at Homs, and became a colonel after only five years. He worked as an adviser to his father, and took action against corruption.

When his father died, the government changed the constitution. Under Syrian law the president had to be at least 40 years old. With law changed, Assad was able to be elected President of Syria in June 2000. He was also made commander in chief of the armed forces, and leader of the Ba'ath Party which has ruled Syria since 1961.

Large protests began in January 2011. The protesters wanted political reforms, an end to the state of emergency (which had been in place since 1963), and the return of civil rights. The protests in March were the largest to take place, and the government used violence against the protestors.

In June 2011, Assad promised reform, a new parliarmentary election, and more freedoms. He also urged refugees to return to Syria.

In January 2012, Assad gave a speech in which he claimed that the uprising was being engineered by foreign countries. He said that a new referendum could be held in March.

The referendum was held in February 2012. The referendum would change the term limits of future Syrian presidents. It passed with 90% support. The U.S. and Turkey did not accept the results. The European Union pushed new sanctions on the government.

In June 2012, the ICRC announced that Syria was in a civil war. The national death toll on both sides reached 20,000.

In 2014 and 2015, he began to lose some support from the Alawite community. This was because an unequal number of soldiers killed in the conflict were Alawites. 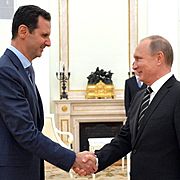 In September 2015, Russia got involved in the Syrian Civil War. President of Russia Vladimir Putin said that Russia's goal in Syria is to "stabilis[e] the legitimate power in Syria and creat[e] the conditions for political compromise." In November 2015, Assad said that the two months of Russian intervention had accomplished more than the U.S.-led coalition had done in a year.

In December 2016, government forces recovered most of Aleppo from rebel forces.

After the election of Donald Trump, the U.S. no longer wished to remove Assad from power. That changed after the Khan Shaykhun chemical attack. Donald Trump ordered missile strikes to hit a Syrian airbase. Assad responded by saying that the United States's behaviour was an "unjust and arrogant aggression." He also said that the Syrian army had given up all its chemical weapons in 2013. He claimed that the chemical attack was a lie and was used to justify a U.S. airstrike.

Assad is married to Asma al-Akhras. Together, they have three children; Hafez, Jr., Zein, and Karim al-Assad.

Influenced by his western education and urban upbringing, Bashar initially seemed eager to implement a cultural revolution in Syria.

In March 2021 Bashar al-Assad of Syria and his wife, Asma, tested positive for the coronavirus.

All content from Kiddle encyclopedia articles (including the article images and facts) can be freely used under Attribution-ShareAlike license, unless stated otherwise. Cite this article:
Bashar al-Assad Facts for Kids. Kiddle Encyclopedia.