A cinnamon roll (also cinnamon bun, cinnamon swirl, cinnamon Danish and cinnamon snail) is a sweet roll commonly served in Northern Europe (mainly in Scandinavia) and North America. In Sweden it is called kanelbulle, in Denmark it is known as kanelsnegl, in Norway it is known as Kanelbolle, Skillingsboller or Kanelsnurr, and in Finland it is known as korvapuusti.

A cinnamon roll consists of a rolled sheet of yeast-leavened dough onto which a cinnamon and sugar mixture (and raisins or other ingredients in some cases) is sprinkled over a thin coat of butter. The dough is then rolled, cut into individual portions, and baked or deep fried. Its main ingredients are flour, cinnamon, sugar, and butter, which provide a robust and sweet flavor 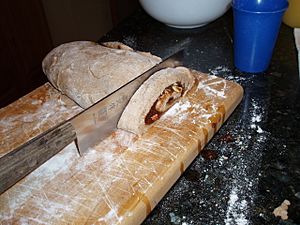 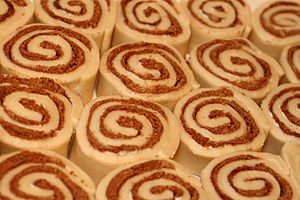 The size of a cinnamon roll varies from place to place, but many vendors supply a smaller size about 5 centimeters (2.0 in) in diameter and a larger size about 10 cm (3.9 in) to a side. The larger variety can be found in Finland, called korvapuusti (lit. a 'cuff on the ear', fig. "pulling someone's ear for disciplining"), where it can be up to 20 cm (7.9 in) in diameter and weigh up to 200 g (7.1 oz).

Haga, a district in Gothenburg, Sweden, is well known for its very large cinnamon rolls. These cinnamon rolls are called hagabullar or 'Queen of the kitchen'. Hagabullar are usually 30 centimeters (12 in) or more in diameter and are, despite their size, not considered a communal roll. Each person usually orders one each. Swedes use pearl sugar to top their cinnamon pastries, not icing as is common in North America.

The Swedish Butterkaka and Finnish bostonkakku ("Boston cake") is a cake made by baking cinnamon rolls in a round cake pan instead of baking them separately, so that they stick together to form a large, round cake.

A German variety, which closely follows the form of the Scandinavian pastry, originating in Hamburg and its surroundings is the Franzbrötchen, a cinnamon pastry inspired by the non-cinnamon French croissant.

The British version is called Chelsea bun, which they invented in the 18th century. It is now available in cafes, supermarkets, and bakeries across the UK.

American cinnamon rolls are frequently topped with icing (usually confectioners' sugar-based) and are sometimes fried, finished with glaze, and served as a variation of a raised donut. There are also regional combinations: in the American Midwest, especially Kansas, cinnamon rolls are commonly eaten with chili.

In Canada, they are known as cinnamon buns. They are usually self-glazed and not iced, nor do they usually have raisins. They can have so much cinnamon that they are spicy and hot to the taste.

In North America, it is commonly eaten for breakfast or dessert. When eaten for a breakfast in the U.S., it may be served with cream cheese frosting.

All content from Kiddle encyclopedia articles (including the article images and facts) can be freely used under Attribution-ShareAlike license, unless stated otherwise. Cite this article:
Cinnamon roll Facts for Kids. Kiddle Encyclopedia.