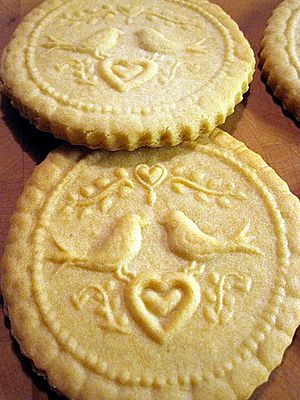 Cream cheese is a soft, mild-tasting, white cheese that contains at least 33% milkfat (as marketed) with a moisture content of not more than 55%. It is sold in brick form or in a small, tub-like container. Variety brands add such additional seasonings as garlic, dill, and olives.

Cream cheese differs from other cheese in that it is not allowed time to mature and is meant to be consumed fresh. It is a primary ingredient in cheesecake and other desserts, and is often spread on bagels and eaten with lox (smoked salmon). On bagels, cream cheese is sometimes referred to by the Yiddish word schmear.

Cream cheese is used in many recipes.

In many European countries, cream cheese is eaten as a cheese, rather than a spread, and it is served on cheese trays. For example, in Italy, chunks of cream cheese are served in fresh salads. Japanese consumers put cream cheese on crusty bread. Cream cheese bars, originally invented in Russia, have made their way State-side in recent years.

All content from Kiddle encyclopedia articles (including the article images and facts) can be freely used under Attribution-ShareAlike license, unless stated otherwise. Cite this article:
Cream cheese Facts for Kids. Kiddle Encyclopedia.