Pain au chocolat ( literally "chocolate bread"), also known as chocolatine in the south-west part of France and in Quebec, is a type of viennoiserie sweet roll consisting of a cuboid-shaped piece of yeast-leavened laminated dough, similar in texture to a puff pastry, with one or two pieces of dark chocolate in the centre. 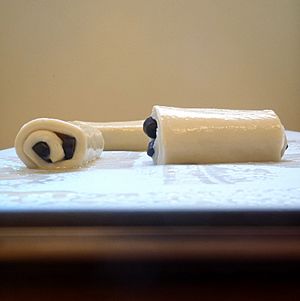 Pains au chocolate prior to baking

Pain au chocolat is made of the same layered doughs as a croissant. Often sold still hot or warm from the oven, they are commonly sold alongside croissants in French bakeries and supermarkets.

In France, the name of the pain au chocolat varies by region:

In Belgium, the words couque au chocolat are also used.

They are often sold in packages at supermarkets and convenience stores, or made fresh in pastry shops.

Legend has it that Marie-Antoinette introduced the croissant to France, but croissants and pains au chocolat are a relatively modern invention. The word croissant, which refers to a plain form of pain au chocolat shaped like a half-moon or "crescent", made its entry in the French dictionary in 1863. The type of pastry, called viennoiserie in French, was introduced in the early 19th century, when August Zang, an Austrian officer, and Ernest Schwarzer, an Austrian aristocrat, founded a Viennese bakery in Paris located at 92, rue de Richelieu.

Originally, croissants and pains au chocolat were made from a brioche base but later evolved to incorporate a buttery flaky dough (pâte feuilletée).

All content from Kiddle encyclopedia articles (including the article images and facts) can be freely used under Attribution-ShareAlike license, unless stated otherwise. Cite this article:
Pain au chocolat Facts for Kids. Kiddle Encyclopedia.