Ziziphus jujuba, the jujube is a species of Ziziphus. It is in the Buckthorn family (Rhamnaceae). It is used mainly as a shade tree which also bears fruit. Its hard, oily wood was, along with pear, used for woodcuts to print the world's first books, starting in the 8th century and continuing through the 19th in China and neighboring countries. As many as 2000 copies could be produced from one jujube woodcut. 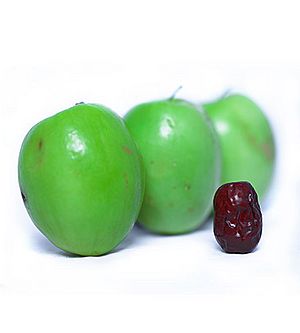 Its precise natural distribution is uncertain due to extensive cultivation, but is thought to be in southern Asia, between Lebanon, northern India, and southern and central China, and possibly also southeastern Europe though more likely introduced there.

This plant has been introduced in Madagascar and grows as an invasive species in the western part of the island. This plant is known as the "hinap" or "finab" in the eastern part of Bulgaria where it grows wild but is also a garden shrub, kept for its fruit. The fruit is picked in the autumn. The trees grow wild in the eastern Caribbean, and are reported to exist in Jamaica, The Bahamas, and Trinidad as well various other area's. 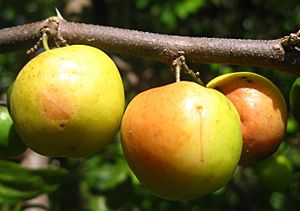 Jujube was domesticated in south Asia by 9000 BC. Over 400 cultivars have been selected. The tree tolerates a wide range of temperatures and rainfall, though it requires hot summers and sufficient water for acceptable fruiting. Unlike most of the other species in the genus, it tolerates fairly cold winters, surviving temperatures down to about −15 °C (5 °F). This enables the jujube to grow in mountain or desert habitats, provided there is access to underground water throughout the summer.

The immature jujube fruit is green in color, but as it ripens it goes through a yellow-green stage with mahogany-colored spots appearing on the skin as the fruit ripens further. The fully mature fruit is entirely red. Shortly after becoming fully red, the fruit begins to soften and wrinkle. 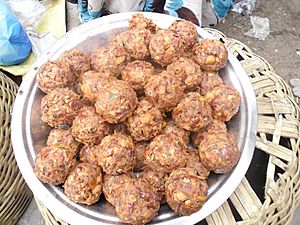 The freshly harvested, as well as the candied dried fruit, are often eaten as a snack, or with coffee. Smoked jujubes are consumed in Vietnam and are referred to as black jujubes. Both China and Korea produce a sweetened tea syrup containing jujube fruit in glass jars, and canned jujube tea or jujube tea in the form of teabags. Jujube fruit is made into juice and jujube vinegar. They are used for making pickles in west Bengal and Bangladesh. In China, a wine is made from jujube fruit.

In Vietnam and Taiwan, fully mature, nearly ripe fruit is harvested and sold on the local markets and also exported to Southeast Asian countries. The dried fruit is used in desserts in China and Vietnam, such as ching bo leung, a cold beverage that includes the dried jujube, longan, fresh seaweed, barley, and lotus seeds. In Korea, jujubes are used in teas. In Croatia, especially Dalmatia, jujubes are used in marmalades, juices, and rakija (fruit brandy). 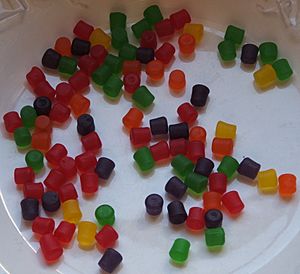 Traditionally in India, the fruit is dried in the sun and the hard nuts are removed. Then, it is pounded with tamarind, red chillies, salt, and jaggery. In some parts of the Indian state of Tamil Nadu, fresh whole ripe fruit is crushed with the above ingredients and dried under the sun to make cakes. It is also commonly consumed as a snack. In Madagascar, jujube fruit is eaten fresh or dried. People also use it to make jam. A jujube honey is produced in the Atlas Mountains of Morocco.

Italy has an alcoholic syrup called brodo di giuggiole. In Senegal Jujube is called Sii dem and the fruit is used as snack. The fruit is turned into dried paste used by school kids. The commercial jujube candy popular in movie theaters originally contained jujube juice but now uses other flavorings.

The fruit and its seeds are used in Chinese and Korean traditional medicine, where they are believed to alleviate stress, and traditionally for anti-fungal, anti-bacterial, anti-ulcer and anti-inflammatory purposes, also wound healing properties.

All content from Kiddle encyclopedia articles (including the article images and facts) can be freely used under Attribution-ShareAlike license, unless stated otherwise. Cite this article:
Jujube Facts for Kids. Kiddle Encyclopedia.