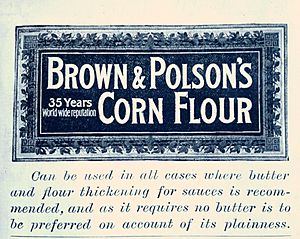 Advertisement for a Cornflour manufacture, 1894

Cornstarch, or cornflour, is the starch of the maize grain, commonly known as corn. It is also ground from the endosperm, or white heart, of the corn kernel. It has a distinctive appearance and feel when mixed raw with water or milk, giving easily to gentle pressure but resisting sudden pressure. It is usually included as an anti-caking agent in powdered sugar (10X or confectioner's sugar). For this reason, recipes calling for powdered sugar often call for at least light cooking to remove the raw cornstarch taste.

A mixture of 1 parts water to 1.5–2 parts cornstarch is a popular classroom demonstration of a dilatant (shear-thickening) fluid. When struck, cut with a knife, or worked vigorously in the hands, it behaves like a pliable solid, but if allowed to sit for a few seconds, it flows as a viscous liquid.

Cornstarch was discovered in 1840 by Thomas Kingsford, superintendent of a wheat starch factory in Jersey City, New Jersey. Until 1851, corn starch was used primarily for starching laundry and other industrial uses.

Cornstarch is used as a thickening agent in liquid-based foods (e.g., soup, sauces, gravies, custard), usually by mixing it with a lower-temperature liquid to form a paste or slurry.

Cornstarch is often used as a binder in puddings and similar foods. Most of the packaged pudding mixes available in grocery stores include cornstarch. Cornstarch puddings may be easily made at home, benefiting from the use of a double boiler. The most basic such pudding may be made only from milk, sugar, cornstarch and a flavoring agent.

It is also used as a thickener in many recipes. Cornstarch is best dissolved in cold water, as it forms obstinate lumps when mixed with warm or hot water.

Cornstarch also has many uses in the manufacturing of environmentally-friendly products. For example, in 2004, the Japanese company Pioneer announced a biodegradable Blu-Ray disc made out of cornstarch.

Cornstarch has been used as a replacement for talc in baby powder.

A common substitute is arrowroot, which replaces cornstarch on a 1:1 ratio.

Cornstarch added to a batter which coated chicken nuggets increased oil absorption and crispness after the latter stages of frying.

Cornstarch can be used to manufacture bioplastics.

Cornstarch is the preferred anti-stick agent on medical products made from natural latex and medical gloves. Prior usage of talc was abandoned as talc was believed to be a carcinogen.

Food producers reduce production costs by adding varying amounts of cornstarch to foods, for example to cheese and yogurt. This is more common in the United States of America where the Congress and the Department of Agriculture subsidize and reduce its cost to food manufacturers.

When roasted in a standard oven it produced dextrin, a chemical compound with uses ranging from adhesive to binder for fireworks.

The corn is steeped for 30 to 48 hours, which ferments it slightly. The germ is separated from the endosperm and those two components are ground separately (still soaked). Next the starch is removed from each by washing. The starch is separated from the corn steep liquor, the cereal germ, the fibers and the corn gluten mostly in hydrocyclones and centrifuges, and then dried. (The residue from every stage is used in animal feed and to make corn oil or other applications.) This process is called wet milling. Finally, the starch may be modified for specific purposes.

All content from Kiddle encyclopedia articles (including the article images and facts) can be freely used under Attribution-ShareAlike license, unless stated otherwise. Cite this article:
Corn starch Facts for Kids. Kiddle Encyclopedia.