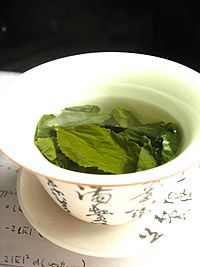 One example is the steeping of corn, part of the milling process. As described by the US Corn Refiners Association, harvested kernels of corn are cleaned and then steeped in water at a temperature of 50 degrees for 30 to 40 hours. In the process their moisture content rises from 15% to 45% and their volume more than doubles. The gluten bonds in the corn are weakened and starch is released.

The corn is then ground to break free the germ and other components, and the water used (steepwater), which has absorbed various nutrients, is recycled for use in animal feeds.

All content from Kiddle encyclopedia articles (including the article images and facts) can be freely used under Attribution-ShareAlike license, unless stated otherwise. Cite this article:
Steeping Facts for Kids. Kiddle Encyclopedia.