The hamadryas baboon (Papio hamadryas) is a species of baboon from the Old World monkey family. It is the northernmost of all the baboons. It lives in the Horn of Africa and the southwestern tip of the Arabian Peninsula. These regions have fewer natural predators than central or southern Africa, where other baboons live.

The hamadryas baboon was a sacred animal in ancient Egypt.

Apart from the striking sexual dimorphism (males are often twice as large as females, which is common to all baboons) this species also shows sexual dichromatism. The fur of males is silver-white in color and they have a pronounced cape (mane and mantle) which they develop around the age of ten, while the females are capeless and brown. Their faces range in color from red to tan to a dark brown. 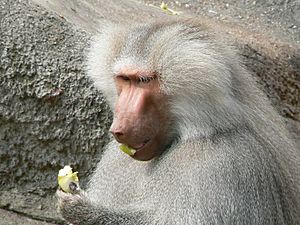 The hamadryas baboon eats fruit in captivity, although it is not a regular part of its diet in the wild.

The baboon's range extends from the Red Sea in Eritrea to Ethiopia, Djibouti and Somalia. Baboons are also native to and live in southwestern Arabia, in both Yemen and Saudi Arabia.

The hamadryas baboon lives in semi-desert areas, savannas and rocky areas, requiring cliffs for sleeping and finding water. The hamadryas baboon is omnivorous and is adapted to its relatively dry habitat. During the wet seasons, the baboon feeds on a variety of foods, including blossoms, seeds, grasses, wild roots, and leaves from acacia trees. During the dry season, the baboons eat leaves of the Dobera glabra and sisal leaves. Hamadryas baboon also eat insects, reptiles and small mammals. One was even observed carrying a dead dik dik.

The baboons’ drinking activities also depend on the season. During the wet seasons, the baboons do not have to go far to find pools of water. During the dry seasons, they frequent up to three permanent waterholes. Baboons will take siestas at the waterholes during midafternoon. Hamadryas baboons will also dig drinking holes only a short distance from natural waterholes. 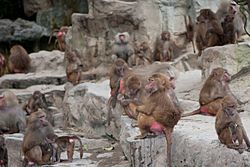 The baboon has an unusual four-level social system called a multilevel society. Most social interaction occurs within small groups called one-male units or harems containing one male and up to ten females which the males lead and guard. A harem will typically include a younger "follower" male who may be related to the leader. Two or more harems unite repeatedly to form clans.

Within clans, the dominant males of the units are probably close relatives of one another and have an age-related dominance hierarchy.

Bands may fight with one another over food, etc., and the adult male leaders of the units are usually the combatants. Bands also contain solitary males that are not harem leaders or followers and move freely within the band. Several bands may come together to form a troop. Several bands in a troop also often share a cliff-face where they sleep. 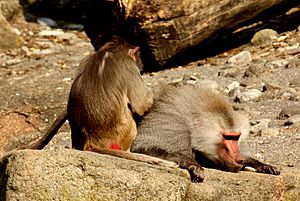 The hamadryas baboon is unusual among baboon and macaque species in that its society is strictly patriarchal. The males limit the movements of the females, herding them with visual threats and grabbing or biting any that wander too far away.

Aging males often lose their females to followers and soon lose weight and their hair color changes to brown like a female. While males in most other baboon species are transferred away from their male relatives and into different troops, male hamadryas baboons remain in their natal clans or bands and have associations with their male kin.

Studies show female baboons retain close associations with their female kin throughout their lives. Females can spend about as much time with other females as they do with the harem males, and some females will even interact with each other outside of their harems. 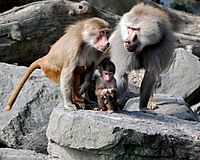 Like other baboons, the hamadryas baboon breeds seasonally. Females do most of the parenting. They nurse and groom the infant and one female in a unit may groom an infant that is not hers.

Like all baboons, hamadryas baboons are intrigued by their infants and give much attention to them. Dominant male baboons prevent other males from coming into close contact with their infants. They also protect the young from predators.

All content from Kiddle encyclopedia articles (including the article images and facts) can be freely used under Attribution-ShareAlike license, unless stated otherwise. Cite this article:
Hamadryas baboon Facts for Kids. Kiddle Encyclopedia.