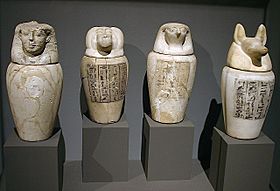 Canopic jars were used to store the internal organs of a mummy in Ancient Egypt. The lid had the head of a baboon, human, falcon or a cow - representing the sons of Horus.

These jars were used to store organs which were removed from a dead person, these were the stomach, the intestine, the liver and the lungs, because they were thought to be useless in the afterlife. Ancient Egyptians mummified only important people, like pharaohs. The jars were placed in the tombs with the bodies.

All content from Kiddle encyclopedia articles (including the article images and facts) can be freely used under Attribution-ShareAlike license, unless stated otherwise. Cite this article:
Canopic jar Facts for Kids. Kiddle Encyclopedia.