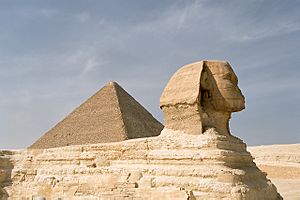 The Great Sphinx of Giza in front of the Great Pyramid of Giza.

The Old Kingdom is the name for Egypt during the 3rd millennium BC when the civilization of Egypt had its first peak. It was the first of three so-called "Kingdom" periods, which mark the high points of civilization in the lower Nile Valley (the others being Middle Kingdom and the New Kingdom).

Old Kingdom was the best by the Third Dynasty through to the Sixth Dynasty (2686 BC – 2134 BC). Many Egyptologists also include the Memphite Seventh and Eighth Dynasties in the Old Kingdom as a continuation of the administration centralized at Memphis. The Old Kingdom was followed by a period of disunity and relative cultural decline that is called the First Intermediate Period by Egyptologists.

The royal capital of Egypt during the Old Kingdom was Memphis. During the Old Kingdom era the great pyramids were built to be burial tombs for the Pharaohs. Because Pharaohs were believed to be given authority from heaven, they wished to walk to Ra, their Sun-god, after death. King Zoser's adviser Inhotep designed the pyramid, hoping to easily reach Ra. The tombs were built on the west bank of the Nile where the sun seemed to set. For this reason, the Old Kingdom is sometimes called "The Age of the Pyramids."

Khufu, called Cheops, was the Pharaoh who built the Great Pyramid at Giza, near Cairo. He believed his soul never died, so they stored food, clothes, and things he owned in the rooms of the pyramid. The Great Pyramid is one of the Seven Wonders of the World: tall as a forty-story building, it took a hundred thousand men twenty years to build. With only ramps and physical energy, they had to move and lift into place 2,300,000 blocks of limestone that were about two and one-half tons apiece. Slaves, farmers, and gangs of men had to work on the Great Pyramid, and were paid with valuable things, not coins (Egyptians had no coins).
To guard the pyramids, a huge stone statue called the Great Sphinx was created and placed nearby. The Great Sphinx has a man's head and a lion's body, with paws 50 ft long.

At last, the priests overthrew the Pharaohs. Then the nobles and priests ruled.

All content from Kiddle encyclopedia articles (including the article images and facts) can be freely used under Attribution-ShareAlike license, unless stated otherwise. Cite this article:
Old Kingdom of Egypt Facts for Kids. Kiddle Encyclopedia.