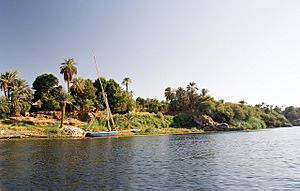 Elephantine is an island in the River Nile, which forms part of the city of Aswan, Egypt. It is about 1,200 metres (3,900 ft) by 400 metres (1,300 ft) in size. The island has been inhabited since Ancient Egyptian times. Today, there are a number of ruins on the island. It also features a botanical garden with a large collection of palm trees.

All content from Kiddle encyclopedia articles (including the article images and facts) can be freely used under Attribution-ShareAlike license, unless stated otherwise. Cite this article:
Elephantine Facts for Kids. Kiddle Encyclopedia.