Cataracts of the Nile facts for kids

The six cataracts of the Nile 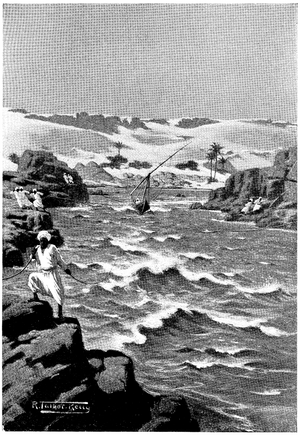 The First Cararact when it was not all underwater

The cataracts of the Nile are shallow stretches between Aswan and Khartoum where the water's surface is broken by numerous small boulders and stones that lie on the river bed, as well as many small rocky islets. This is called "white water".

River cararacts often go with a rapid down-drop of the river,

The six first cataracts of the River Nile were the main obstacles for boats sailing on the Nile in antiquity. Counted upstream (from north to south), the First Cataract is in modern Egypt; the rest are in Sudan.

In ancient times, Upper Egypt extended from the Nile Delta to the first cataract. Further upstream, in what is modern Sudan, the land was later controlled by the Kingdom of Kush.

The cataract faces north, not south, because the river flows north, from Lake Victoria in the south.

The 1899 book "The River War" by Winston Churchill explains each of the cataracts.

All content from Kiddle encyclopedia articles (including the article images and facts) can be freely used under Attribution-ShareAlike license, unless stated otherwise. Cite this article:
Cataracts of the Nile Facts for Kids. Kiddle Encyclopedia.