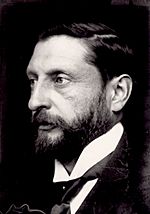 Henry Rider Haggard (1856–1925) was an English writer. He is best known for his adventure novels. His novels were notable for their unusual invention and stories that kept people interested. His best novels were very popular in his lifetime. They made the genre of adventure fiction popular again. Haggard also wrote books about farming and emigration.

Haggard lived in South Africa for six years when he was a young man. Many of his novels were set in Africa, including King Solomon's Mines (1886), Allan Quatermain (1887) and She (1887).

All content from Kiddle encyclopedia articles (including the article images and facts) can be freely used under Attribution-ShareAlike license, unless stated otherwise. Cite this article:
H. Rider Haggard Facts for Kids. Kiddle Encyclopedia.