Journey to the Center of the Earth facts for kids

Journey to the Center of the Earth (French: Voyage au centre de la Terre), also translated with the variant titles A Journey to the Centre of the Earth and A Journey into the Interior of the Earth), is a classic science fiction novel by Jules Verne. It was first published in French in 1864, then reissued in 1867 in a revised and expanded edition. Professor Otto Lidenbrock is the tale's central figure, an eccentric German scientist who believes there are volcanic tubes that reach to the very center of the earth. He, his nephew Axel, and their Icelandic guide Hans rappel into Iceland's celebrated inactive volcano Snæfellsjökull, then contend with many dangers, including cave-ins, subpolar tornadoes, an underground ocean, and living prehistoric creatures from the Mesozoic and Cenozoic eras. (The 1867 revised edition inserted additional prehistoric material in Chaps. 37–39.) Eventually the three explorers are spewed back to the surface by an active volcano, Stromboli, in southern Italy.

The category of subterranean fiction existed well before Verne. However his novel's distinction lay in its well-researched Victorian science and its inventive contribution to the science-fiction subgenre of time travel—Verne's innovation was the concept of a prehistoric realm still existing in the present-day world. Not surprisingly, Journey inspired many later authors, including Sir Arthur Conan Doyle in his novel The Lost World and Edgar Rice Burroughs in his Pellucidar series.

The story begins in May 1863, at the Lidenbrock house in Hamburg, Germany. Professor Otto Lidenbrock dashes home to peruse his latest antiquarian purchase, an original runic manuscript of an Icelandic saga written by Snorre Sturluson, "Heimskringla", a chronicle of the Norwegian kings who ruled over Iceland. While leafing through the book, Lidenbrock and his nephew Axel find a coded note written in runic script along with the name of a 16th century Icelandic alchemist, Arne Saknussemm. (This novel was Verne's first to showcase his love of cryptography; coded, cryptic, or incomplete messages would appear as plot devices in many of his works, and Verne would take pains to explain not only the code itself but also the mechanisms for retrieving the original text.) Lidenbrock and Axel transliterate the runic characters into Latin letters, revealing a message written in a seemingly bizarre code. Lidenbrock deduces that the message is a transposition cipher, but achieves results no more meaningful than the baffling original.

Professor Lidenbrock locks everyone in the house and forces himself, Axel, and Martha the maid to go without food until he cracks the code. Axel discovers the answer when fanning himself with the deciphered text: Lidenbrock's deciphering was correct but simply needed to be read backward in order to reveal a paragraph written in rough Latin. Axel tries to hide his discovery from Lidenbrock, afraid of the professor's maniacal reactions, but after two days without food, he knuckles under and reveals the secret to his uncle. Lidenbrock translates the paragraph, a 16th century note written by Saknussemm, who claims to have discovered a passage to the center of the earth via the crater of Snæfellsjökull in Iceland. The deciphered message reads:

which, when translated into English, reads:

Go down into the crater of Snaefells Jökull, which Scartaris's shadow caresses just before the calends of July, O daring traveler, and you'll make it to the center of the earth. I've done so. Arne Saknussemm 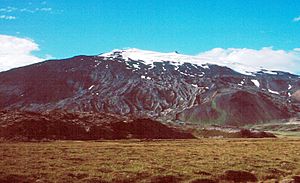 A man of astonishing impatience, Lidenbrock departs for Iceland immediately, taking the reluctant Axel with him. The latter repeatedly tries to reason with his uncle, describing the dangers of descending into a volcano that could very possibly reactivate, then putting forward several accepted scientific theories as to why the journey is flatly impossible. The professor ignores Axel's arguments, and after a swift trip via Kiel and Copenhagen, they arrive in Reykjavík. There they hire as their guide Icelander Hans Bjelke, a Danish-speaking eiderduck hunter, then travel overland to the base of Snæfellsjökull.

In late June they reach the volcano, which has three craters. According to Saknussemm's message, the route to the earth's center is via the crater that's touched by the noontime shadow of a nearby mountain peak, Scartaris, just before the end of June. But at that point the weather proves too cloudy for any shadows, and Axel hopes this will force his uncle to abandon the project and go home. Alas for Axel, the sun finally comes out, and Scartaris's shadow indicates the correct crater.

Reaching the bottom of the crater, the three travelers set off into the bowels of the earth, encountering many dangers and strange phenomena. After taking a wrong turn, they run short of water and Axel nearly perishes, but Hans saves them all by tapping into a subterranean river, which shoots out a stream of water that Lidenbrock and Axel name the "Hansbach" in the guide's honor. Later on Axel becomes separated from his companions and gets lost deep in the earth. Luckily an odd acoustic phenomenon allows him to communicate with the others from a distance, and they are soon reunited. 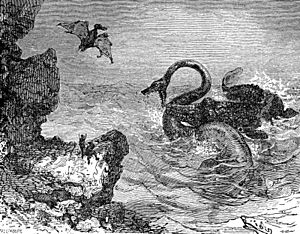 Édouard Riou's illustration of an ichthyosaurus battling a plesiosaurus.

Following the course of the Hansbach, the explorers descend many miles and reach a cavern of colossal size. It's a genuine underground world that's lit by electrically charged gas near its ceiling, is filled by a deep subterranean ocean, and surrounded by a rocky coastline that's covered with petrified tree trunks, the fossils of prehistoric mammals, and gigantic living mushrooms. The travelers build a raft out of semipetrified wood and set sail. The professor names the ocean the "Lidenbrock Sea" and their takeoff point "Port Gräuben", after his goddaughter back home (whom Axel will marry at the novel's end). While at sea they encounter prehistoric fish from the Devonian Period and giant marine reptiles from the age of dinosaurs, including an ichthyosaurus, which battles and defeats a plesiosaurus. After the conflict between these monsters, the party reaches an islet with a huge geyser, which Lidenbrock names "Axel Island".

A lightning storm threatens to destroy the raft and its passengers, but instead surprises them by apparently throwing them back onto the very coastline they'd previously left. But this section of coast, Axel discovers, is the site of an enormous fossil graveyard, including bones from the pterodactyl, megatherium, and mastodon, plus the preserved body of a man. Nephew and uncle then venture into a forest featuring primitive vegetation from the Tertiary Period; in its depths they are stunned to find a prehistoric humanoid more than twelve feet in height and watching over a herd of mastodons. Axel isn't sure he has actually seen the creature or not, and he argues with Lidenbrock over whether it's a manlike ape or an apelike man. In any case, fearing it may be hostile, they quickly leave the forest.

Continuing to explore the coastline, the travelers find a passageway marked by Saknussemm as the way ahead, but unfortunately it has been blocked by a recent cave-in. The adventurers lay plans to blow the rock open with gun cotton, meanwhile paddling their raft out to sea to avoid the blast. On executing this scheme, however, they find a seemingly bottomless pit beyond the impeding rock and are swept into it as the sea rushes down the huge open gap. After spending hours descending at breakneck speed, their raft reverses direction and rises inside a volcanic chimney that ultimately spews them into the open air. When they regain consciousness, they learn that they've been ejected from Stromboli, a volcanic island located off Sicily.

The trio returns to Germany, where Axel and Lidenbrock deduce that the electric storm at sea had reversed the poles of their compass — in actuality they hadn't been driven backward but forward to a new shore notable for containing gigantic hominids. At home in Hamburg again, they enjoy great acclaim; Professor Lidenbrock is hailed as one of the great scientists of the day, Axel marries his sweetheart Gräuben, and Hans returns to his peaceful, eiderdown-hunting life in Iceland.

The novel's paleontology drew heavily on the descriptions of prehistory in Louis Figuier's 1863 popular-science work La Terre avant le déluge ("The Earth before the Flood"); Verne was personally acquainted with Figuier and a fellow member of Paris's Circle of the Scientific Press.

All content from Kiddle encyclopedia articles (including the article images and facts) can be freely used under Attribution-ShareAlike license, unless stated otherwise. Cite this article:
Journey to the Center of the Earth Facts for Kids. Kiddle Encyclopedia.