The Common Eider (Somateria mollissima) is a large sea-duck. They live on the northern coasts of Europe, North America and eastern Siberia. It breeds in Arctic and some northern temperate regions. They winter farther south in temperate zones. There it can form large flocks on coastal waters. It can fly at speeds up to 113 km/h (70 mph).

The Common Eider is both the largest of the four eider species and the largest duck found in Europe and in North America. It measures 50 to 71 cm (20 to 28 in) in length, weighs 0.81 to 3.04 kg (1.8 to 6.7 lb) and spans 80–110 cm (31–43 in) across the wings. It has a bulky shape and large, wedge-shaped bill. The male is unmistakable, with its black and white plumage and green nape. The female is a brown bird. It can be told apart from all ducks, except other eider species, because of size and head shape. This duck's call is a pleasant "ah-ooo". The species is often readily approachable.

This species dives for crustaceans and molluscs, with mussels being a favoured food. The eider will eat mussels by swallowing them whole; the shells are then crushed in their gizzard and excreted. When eating a crab, the Eider will remove all of its claws and legs, and then eat the body in a similar fashion. 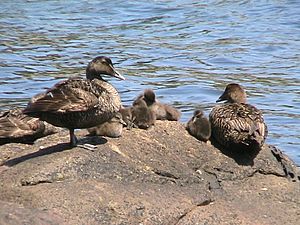 Eiders are colonial breeders. They nest on coastal islands in colonies ranging in size of less than 100 to upwards of 10,000-15,000 individuals. Female eiders often return to breed on the same island where they were hatched. This can lead to a high degree of relatedness between individuals nesting on the same island.

All content from Kiddle encyclopedia articles (including the article images and facts) can be freely used under Attribution-ShareAlike license, unless stated otherwise. Cite this article:
Common Eider Facts for Kids. Kiddle Encyclopedia.